Find out more about food pyramids and how they work.

As you pass along a food chain, the number of individual animals decreases at each trophic level. If you arrange these numbers on top of each other, they form a pyramid shape.

Here’s an example from a woodland food chain: 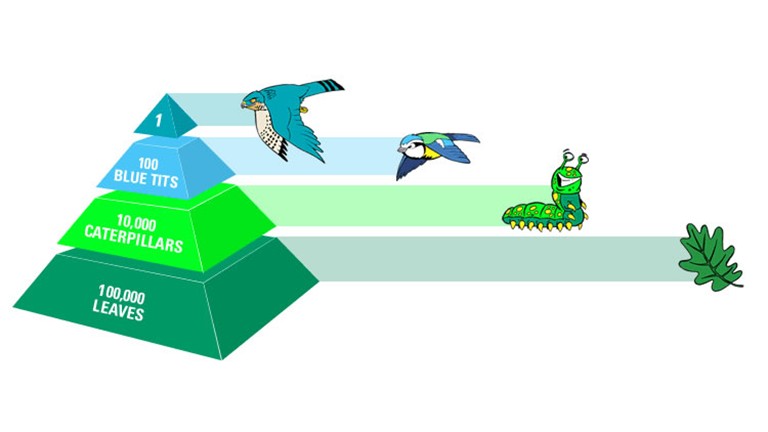 All food chains form this shape. It is called a pyramid of numbers. It has a broad base of plants (producers), supporting a smaller number of plant-eaters (primary consumers), and so on up the pyramid, with the numbers getting smaller as you get higher. The smallest number is always the one that shows the predators at the top.

Enough to go round

The reason for the pyramid shape is simple. There must always be enough plants producing food at the bottom, or else the whole food chain would collapse. Higher up, no predator (consumer) can be as common as its prey, otherwise both animals would soon die out. This is why sparrowhawks can never be more common than blue tits in an ecosystem that they share.

A pyramid of biomass

There may be 40 blue tits and only one sparrowhawk in a wood. But a sparrowhawk weighs about 20 times more than a blue tit.

So the hawk takes up about half as much living material as all the blue tits combined. 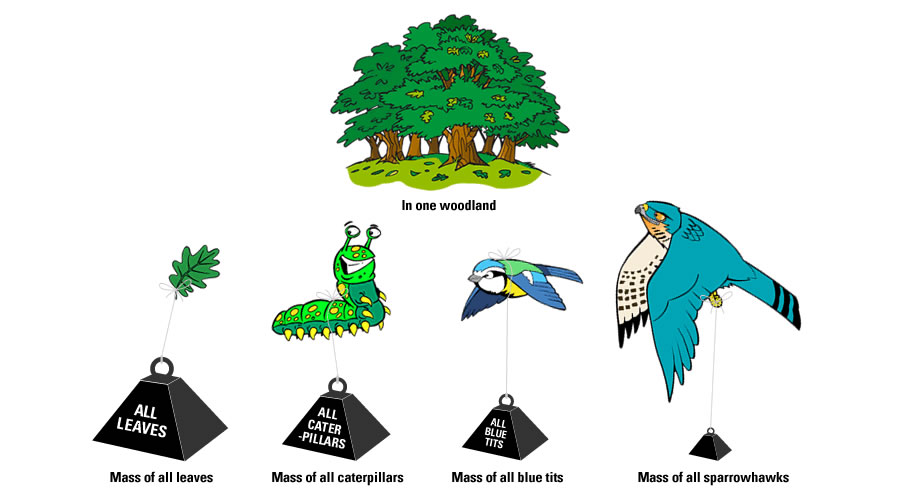 The measurement of living material in an ecosystem is called biomass. A pyramid of biomass shows how much energy there is at each level of a food chain. It shows you how much prey a predator needs in order to survive.

How breeding affects the food chain

Plants reproduce in huge numbers, making sure that the pyramid keeps its shape. They send out millions of seeds – think of a dandelion clock – that sprout all over the place – offering a constant feast for consumers. Animals low down the chain, such as insects or frogs, tend to lay lots of eggs. This way plenty make it to adulthood, even though thousands get eaten along the way.

Top of the chain

Predators at the top of the food chain tend to be the biggest animals in it. These are sometimes called apex predators.

Damage to any part of a food chain can cause problems right along it.