East West Rail (EWR) is a project to build a new rail link between Oxford and Cambridge, via Bicester, Milton Keynes and Bedford.

As part of its proposals for the Oxford-Cambridge Arc, the UK Government has identified EWR as essential for improving east-west transport links to unlock the region’s economic growth potential and support accelerated housebuilding, including four new settlements being proposed along its route.

The rail connection between Oxford and Cambridge is due to open by 2030. The western section between Oxford and Bedford is at an advanced stage, being built by reinstating sections of the old Varsity Line that was closed in the 1960s and upgrading existing lines. In contrast, connecting Bedford to Cambridge requires an entirely new rail line along a new route, presenting additional challenges to minimising negative impacts on nature.

Despite commitments to decarbonise the UK transport sector, which contributes more than any other to domestic greenhouse gas emissions (27 per cent in 2019), Secretary of State for Transport Grant Shapps MP has confirmed that EWR will not be an electrified line from first operation, leaving open the possibility that it will run more polluting and GHG emitting diesel-electric trains.

"We're building it in such a way that we can use, probably, the very latest technology, potentially, in the future," he said.

But, as the caveats – "might potentially", "probably", "potentially" – highlight, these new technologies are not ready. In the meantime, a non-electrified line will only add to the UK’s overall GHG emissions.

We are also concerned that the route for EWR between Bedford and Cambridge could be chosen without proper consideration of the full scale of environmental impacts – including indirect impacts – as a result of not just the railway, but also of the rapid urbanisation that will follow it.

The most recent public consultation on East West Rail, including options for the route between Bedford and Cambridge, closed on 9 June 2021. You can read our formal consultation reponse here. 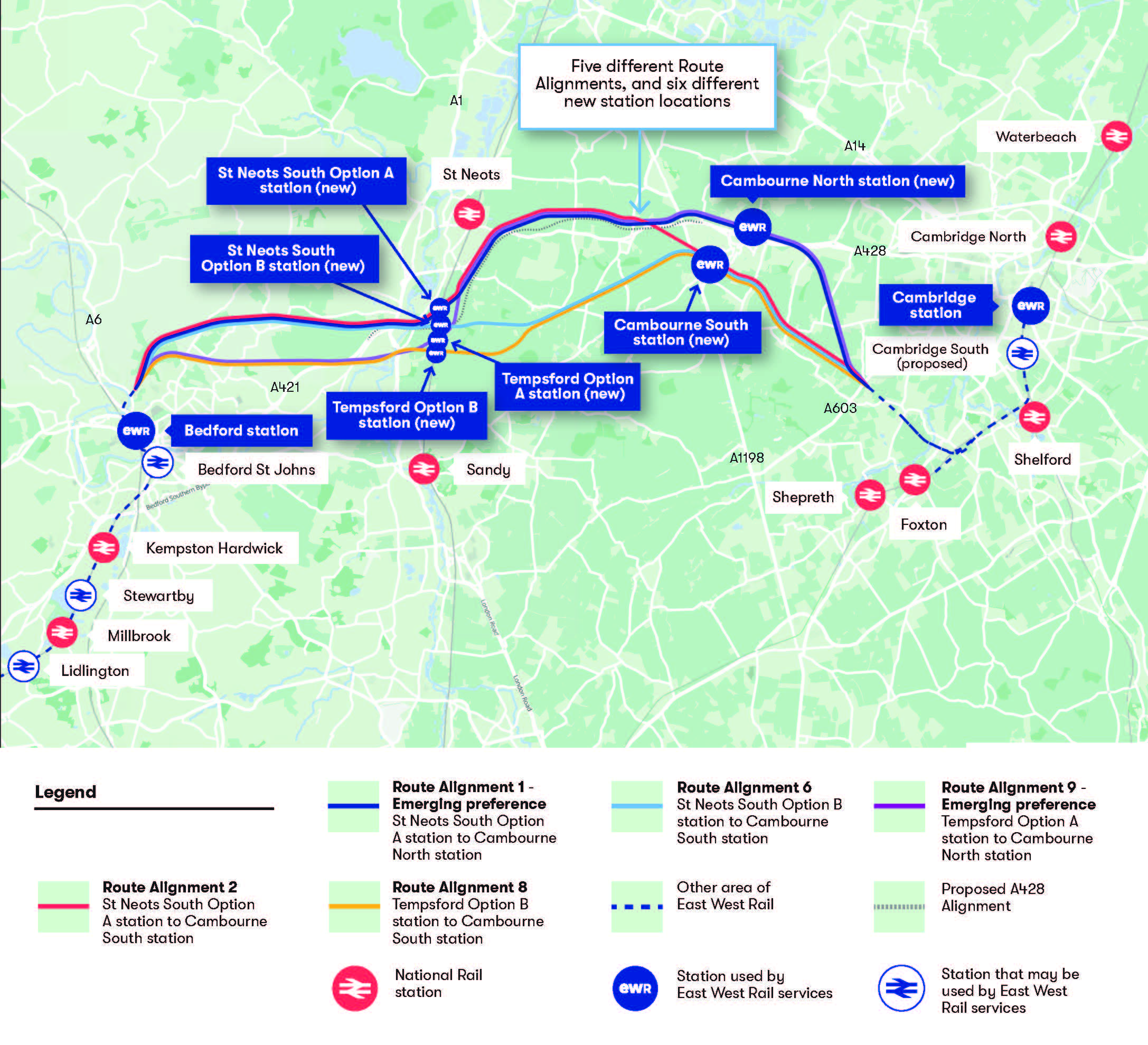 Earlier route options that passed within metres of RSPB The Lodge nature reserve, running the high risk of significant negative impacts on wildlife, have been excluded from further consideration.

Depending on the final route chosen for line though, EWR could still affect numerous locally important wildlife sites. These are some of the last best bits of land that provide homes for nature in the heavily modified landscape of Bedfordshire and Cambridgeshire and are treasured as such by local communities.

We want to see the final route for EWR between Bedford and Cambridge minimise the risk of any loss of or damage to these valuable places for nature and people, as well as avoiding any loss of irreplaceable habitats like ancient woodlands and grasslands.

As part of Government proposals for growth in the Oxford-Cambridge Arc, the final route of the EWR line will determine the location of significant new housing development in Bedfordshire and Cambridgeshire. The failure to properly consider the cumulative environmental impacts of future housing located close to EWR stations could lead to unforeseen negative impacts and exacerbate existing pressures on natural ecosystems.

For example, East West Rail and associated housing could still affect wildlife at The Lodge through increased numbers of people visiting the site adding to disturbance and other pressures.

Finally, failure to ensure EWR is powered by low carbon energy from first operation would undermine efforts to reach net zero by 2050 and prevent the worst impacts of climate change by keeping global warming within 1.5°C.

Prime Minister Boris Johnson’s pledge to reduce the UK’s greenhouse gas emissions by 78% by 2035 only highlights the need for EWR to be decarbonised from day one.

How you can help

If you share our concerns about the potential environmental impacts and outcomes of East West Rail and associated housing development, contact East West Rail Company using the information on this page to inform your comments.

If you live in Bedfordshire or Cambridgeshire, you might also want to write to your MP or Councillors to ask them to represent your concerns and call for EWR to be delivered in the most environmentally responsible way possible. You could also write to Grant Shapps MP, who is currently the Secretary of State for Transport.

You can find contact information for local and national politicians, including your local Councillors and MP, on the website writetothem.com.

You can read our full formal response to the most recent public consultation (31 March - 9 June 2021) on East West Rail here.

Strategic investment in low carbon rail infrastructure is preferable to alternatives like motorway expansion or internal aviation, which could be significantly worse for the UK’s greenhouse gas emissions and would have their own impacts on wildlife.

As with any major infrastructure project though, there is the potential for East-West Rail to have significant impacts on wildlife and priority habitats and species,  through direct impacts resulting from the construction and operation of the new railway line and indirect impacts, including cumulative impacts with other major infrastructure projects and with the associated housing growth that EWR is explicitly designed to facilitate as part of the Government’s Oxford-Cambridge Arc proposals.

We are therefore urging Government and East West Rail Co. to ensure the scheme:

An alternative approach to Cambridge

The RSPB is not advocating for one route over any other, but local campaigning group CamBed RailRoad (CBRR) have proposed a more northerly route from Bedford, connecting St Neots, Cambourne and Northstowe before entering into Cambridge from the north.

The Wildlife Trust for Beds, Cambs and Northants (WTBCN) has indicated that a northern route would have reduced impact on Local Wildlife Sites and we support their call for a northern route to be considered as part of a Strategic Environmental Assessment of the alternatives to the emerging preferred route.

*If you're confused about SEA and EIA (Environmental Impact Assessment) it's worth knowing that EIA will be done once the preferred route is chosen and the designs have been well worked up. By then though, other potentially environmentally preferrable alternatives may have been dropped from further consideration. Doing SEA of all the options beforehand would help identify the route that is best for the environment. For more information visit the Government's guidance page: Strategic environmental assessment and sustainability appraisal.