Construction of an airport & the development of a tourism industry in St Helena may have a profound effect on the environment & it's unique wildlife.

St Helena is a small island of 121 square kilometres 1,600 kilometres west of Angola in the middle of the South Atlantic Ocean.

It is one of 14 United Kingdom Overseas Territories and has a human population of just 4,500. It has a rich natural and cultural history, but has suffered economically in the last few decades, meaning  many 'Saints' have left the island to find work abroad.

In November 2011 the UK government confirmed it would finance the building of an airport on St Helena to improve access and facilitate inward investment and the development of a tourism industry on the island. Construction of this airport is now now complete and the first commercial flight from South Africa landed in October 2017.

As part of the project, the RSPB, in partnership with the St Helena Government and Saint Helena National Trust have established mitigation areas for wirebirds to nest and feed in. The airport will also have impacts on endemic invertebrate species.

As a result of the airport going ahead, significant upgrades of St Helena’s infrastructure have taken place, including a new road to the airport, and an expansion of the island's electricity generating capacity through the provision of renewable energy projects including wind turbines and a solar farm. Hotel, housing and tourism projects are also proposed in the Development Plan for the island, and the first of these developments are starting to be consented.

Alongside our partner - the St Helena National Trust - we're working to ensure that the airport and inward investment projects do not have adverse impacts on St Helena's unique and endangered endemic species. Although the development of new economic opportunities on the island is sorely needed, it is imperative that these do not degrade or destroy the very things that tourists will come to the island to see – its unique species and habitats.

The first test of this approach is the now consented 'Wirebird Hills' hotel and golf course development at Broad Bottom. This development site contains one of the five most important breeding areas for wirebirds in the world. With the St Helena National Trust, we are working with the developer and their consultants to ensure that enough undisturbed and suitably managed habitat is retained in the development area to ensure that this site remains a stronghold for the Wirebird into the future, and that the development lives up to its name.

Like many other isolated islands, St Helena's long separation from other landmasses meant it developed a unique flora and fauna, which remained intact until its discovery in the 16th Century.

Since then, introduced grazing animals (particularly goats), invasive plant species (eg gorse and flax) and mammalian predators (principally rats and cats) have decimated the natural flora and fauna to the extent that seven out of eight of the original endemic bird species are now extinct, in addition to numerous endemic invertebrates and plants.

The latest confirmed extinction was the St Helena Olive tree, the last individual of which died in 2004. St Helena's original vegetation and ecosystems to a large extent do not exist anymore, having been cleared by man, grazed out of existence or overcome by invasive plants. Remnants do cling on though and are now starting to be restored.

The St Helena plover, or wirebird, is the only surviving species of the eight unique types of bird species which were found on the island when man arrived. In the early 2000's its population suffered steep declines (down 40 per cent), leading to a situation in 2004 where only 235 individuals remained in the world, all on this small speck in the middle of the South Atlantic.

Following concerted action by the RSPB and St Helena National Trust, supported by the UK and St Helena Governments, the population has now recovered well. The species is still classified as critically endangered however, and we need to ensure its breeding areas are protected from inappropriate development, in tandem with measures to manage its preferred habitats properly and protect it eggs and chicks from predators. We also need to ensure that road casualties on the newly improved roads around the airport to not threaten the population’s recovery. 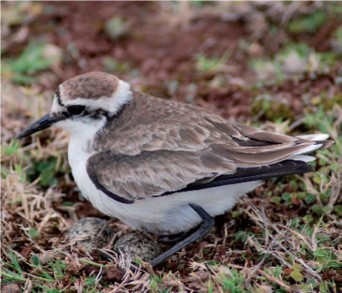 We recognize the need for the development of St Helena's economy, however, this needs to be achieved while safeguarding the island's unique and endangered species.

The wirebird nests on the ground and needs relatively flat areas in which to nest and raise its chicks. Flat land on St Helena is at a premium though, so areas for development are likely to coincide with where the birds need to nest and feed. A careful balance therefore needs to be struck between needed development and retention of space for nature.

We have already worked constructively with the UK and St Helena governments to ensure mitigation areas were provided for wirebirds to replace those breeding areas lost through the construction of the airport. We are happy that much of the work to provide mitigation and compensatory habitat in the Environmental Management Plan for the project have now been completed. We will also work to ensure the mitigation areas receive long-term management to retain their value for wirebirds.

We have also been active in commenting on a suite of plans which will guide St Helena's future, including the Land Development Control Plan, Sustainable Development Plan and Environmental Management Plan. We will aim to work with the St Helena National Trust and St Helena Government to ensure that implementation of these documents leads to sustainable development of the island and the retention and enhancement of its biodiversity.

St Helena Government's vision for the island is that it develops as an eco-tourism exemplar. However, there is a grave risk that in the rush for inward investment, there will be a temptation to cut corners with proper due diligence of development proposals and with avoidance and mitigation measures needed to retain and enhance endangered species. We will therefore be pressing the government to ensure that development proposals are objectively impact assessed and that the precautionary principle is applied where necessary.

We will also aim to work constructively with developers (such as SHELCO at the Wirebird Hills hotel and golf development) to identify how development can go ahead whilst retaining and enhancing populations of endemic species.

We are pleased the St Helena Government has proposed a large network of National Conservation Areas, which include those sites important for nesting wirebirds. We will be encouraging the government to draft, consult on and implement management plans for these sites as soon as possible, with particular emphasis on those sites which may be affected by development.

Information on St Helena - Britain's second oldest territory, and the most isolated inhabited island in the world. PDF, 591Kb.

We are against the construction of an airport in the Thames Estuary, including the government's latest proposals.

One of the most important wetlands in Africa is in danger of drowning under a plethora of proposed developments.