The UK Government’s Wildbird Populations Indicator shows that woodland bird populations have declined by more than 20% between 1976 and 2001.

Following the results of a 2003-04 resurvey of deciduous woodland bird populations, we can see which birds give cause for concern.

This indicator and these results offer a useful guide to the health of the UK’s woodlands, but are only part of the conservation story, as there are also important bird species affected by conifer plantation forestry. 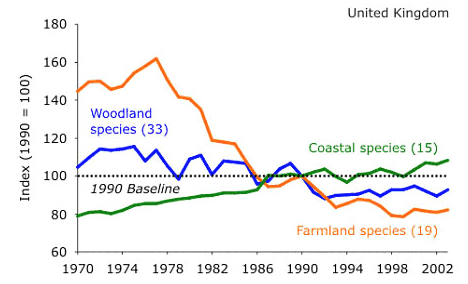 For example, black grouse in Wales and Scotland associated with young forestry and the edges of plantations; the capercaillie in Scotland’s established and new native pinewoods; and the nightjar and woodlark, which occur in forest clearfells and lowland heathland remnants in Southern and Eastern England.

We are working together with the UK Government, devolved administrations, the Forestry Commission and Forest Service, conservation agencies and other organisations to further investigate the causes of broadleaved and conifer woodland bird declines, and how these population changes vary across the UK.

How do we start to restore habitats?

Large areas of important habitats, especially lowland heathland and peatland, have been lost to afforestation. However, with vision and hard work it is possible to restore them.

Woodlands need to be managed to benefit priority bird species and other biodiversity.

This requires a targeted management approach, but this can be successfully combined with other woodland objectives, such as timber production.

The RSPB's forestry policies cover more than just the countries of the UK. Find out more about forestry issues.