Oxford Swift City at the Museum of Natural History

In Oxford, swifts have been inspiring the next generation. Chris Jarvis, Education Officer at the Oxford University Museum of Natural History tells us more.

As the site of the longest running continuous study of any bird population in the world – the study of the colony of swifts in our tower, it seemed essential to the University Museum of Natural History that we involve ourselves as partners in the RSPB’s ‘Oxford Swift City’ project.

During the first two weeks of May 2018, the Museum delivered 10 taught sessions based around swifts and conservation, supported by the Oxford Swift City Project. In total, 233 pupils from years 3, 4 and 5 were involved in learning about the natural history of swifts, seasonality, food chains, migration and the varied biomes and peoples that they fly over during their annual journey.

The sessions involved an interactive slide show and handling museum specimens of swifts and other animals typical of the places that they migrate over – from a stuffed cheetah to crocodile, camel and warthog skulls. The session culminated with looking at actions that can be taken to try and mitigate the recent decline in the population of swifts, the different countries and peoples that the swifts cross on their migration and global citizenship, conservation and the role of the HLF Oxford Swift City project.

Understanding the need for action

After their session the children were given an opportunity to explore the museum for other long distance animal migrants via a bespoke trail that encouraged them to think about the importance of seasonal food chains and the need for both global and local action in conserving creatures that are often sighted in Britain and considered ‘our’ fauna.

Before they left, the children were each supplied with a packet of wildflower seeds to encourage insect life (swift food!) into their local area and encouraged to look out for swifts, report sightings and follow the museum’s nesting swifts via our live webcam. 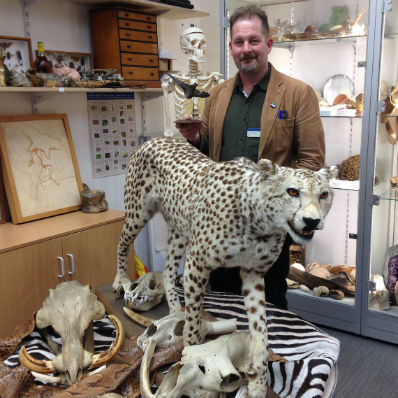 Chris alongside museum specimens of animals that swifts may encounter on their migration. Photo credit: Sarah Lloyd

The sessions were such a success that one head teacher commented ‘The Year 3/4s had their visit to the Natural History museum for the Swift project and absolutely loved it!! I can't remember a visit where both children and adults came back raving so much.’

Another school used the children’s enthusiasm to build on persuasive writing skills, writing speeches on the importance of conservation. Their teacher commented… ‘The children are certainly enthused by swifts, they are taking it as their sole responsibility to save them!’

The ‘Oxford Swift City’ project was a huge success for the museum allowing us to develop a new conservation based session that is now permanently available during the swift breeding season. It allowed us to illustrate to children that Natural History museums are places where science takes place, that they can participate in this, and that this has direct links to the living world around them and involves them on a deeply personal, emotive level.

Several months after the project I revisited one of the schools and some children stopped me in the playground to say hello, there was a scream overhead and before I could look up I heard one of them shout ‘Look! A swift!’