The RSPB headquarters has welcomed six new team members - Dartmoor ponies! And this is far from the first time the RSPB has called on larger grazing animals for their help in restoring spaces for conservation. The British Isles has lost most of its large wild herbivores, apart from deer, so we sometimes recruit them in to help restore habitats at RSPB reserves. Here we look at some ways they can help transform landscapes for everything from bugs to birds, and at how these new Dartmoor ponies will help conservation at the heart of the RSPB.

On 5 April six Dartmoor ponies, named Kevin, Podkin, Pook, Barramoor Tom, Black Magic, and Roger, travelled all the way from their home in Dartmoor to RSPB headquarters, The Lodge nature reserve in Bedfordshire. Their job will be to help make the space an even more attractive home for everything from bugs to birds. 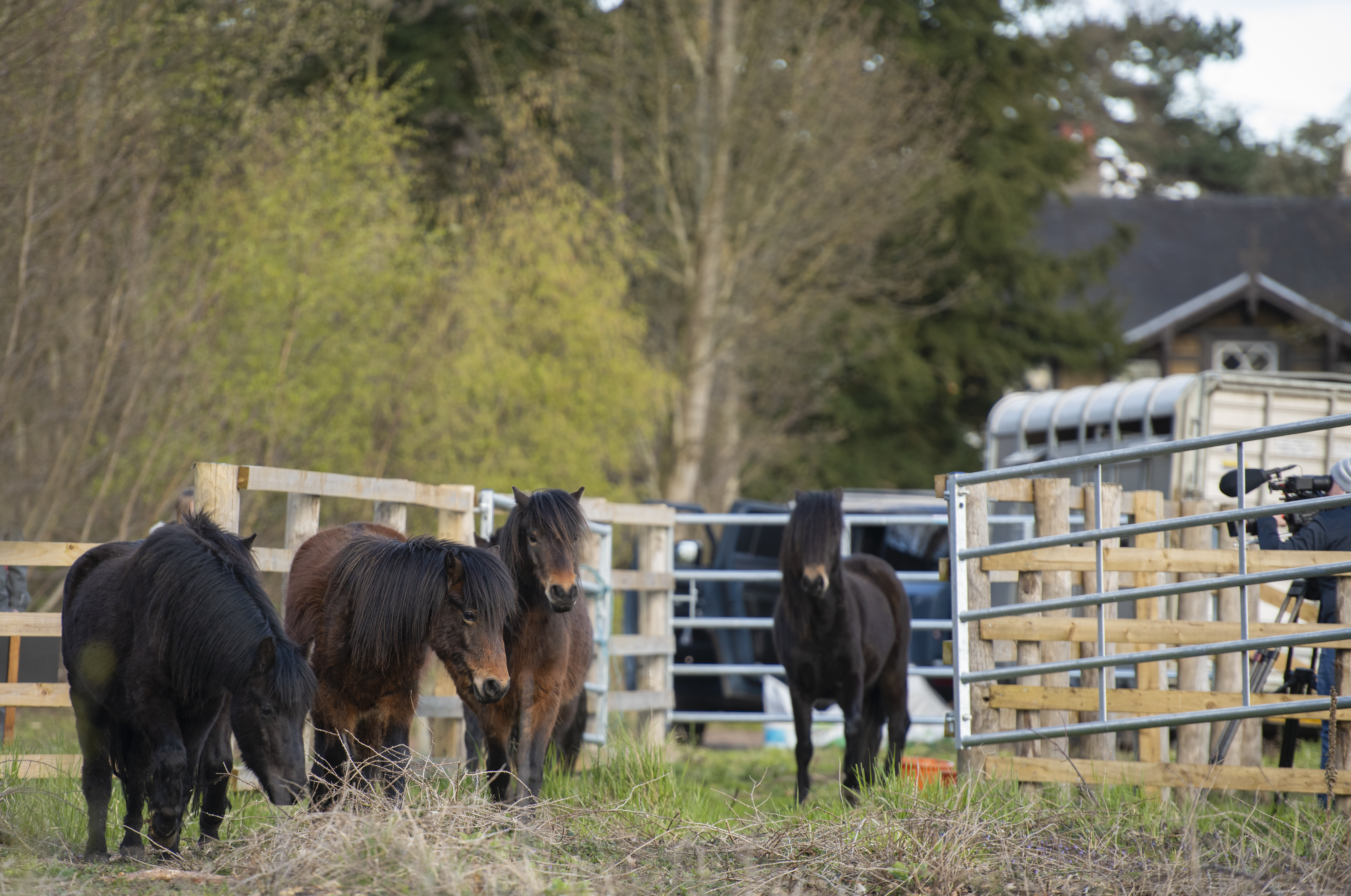 Dartmoor ponies are an endangered native breed of pony that are prized for their hardiness, even temperament, and ability to eat plants that other ponies and horses might balk at. This ability to nip, nibble, and stamp thick gorse and brambles brings in light and opens whole new pathways for them to poo in. This creates space for plants to grow, and the poo provides food for insects and bugs which themselves are tasty morsels for reptiles and birds. The dung invertebrates also play a vital role in returning nutrients back into the soil – it’s a whole circle of life revolving around pony poo.

The hope is that the new pony team will help create a space that is suited for woodlark, nightjars, as well as natterjack toads and many invertebrate species. They’ll be staying at The Lodge for the next three or four months before returning to their home in Dartmoor, and we look forward to hearing how they did at their spring and summer job! 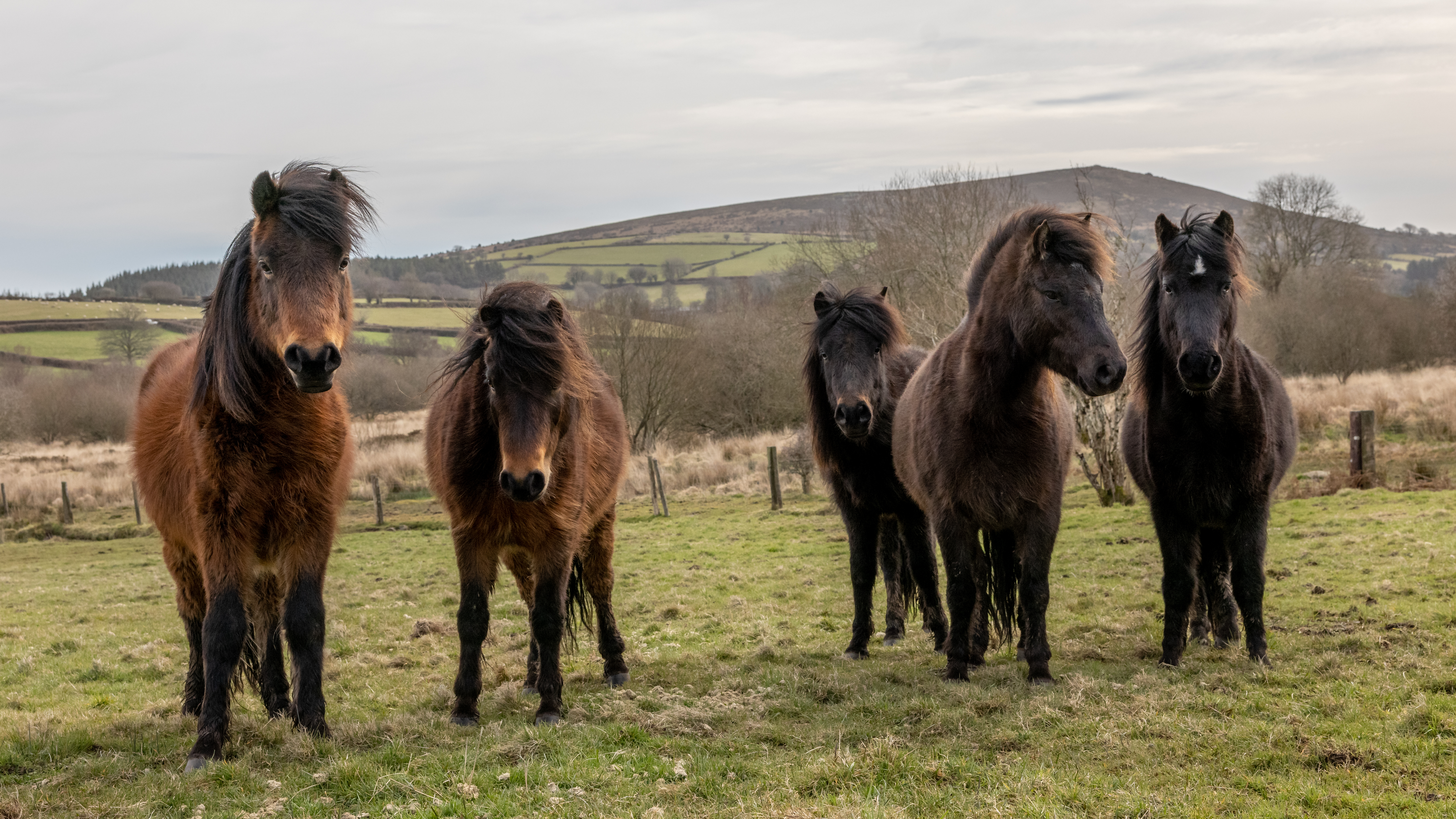 This is not the first time that the RSPB has called on Dartmoor ponies for their services – in RSPB’s Labrador Bay in Devon they’ve helped the red-listed cirl bunting bird jump from three pairs to 30 in just over ten years (from 2008 to 2019).

Cattle from forest to marsh

The RSPB has also called on a whole range of other grazers for help, including cattle, sheep, and even goats and pigs! In 2019, for example, the RSPB introduced Highland Cattle to Abernethy Forest in The Highlands to help create habitats for the Capercaillie. Abernethy is the only RSPB reserve where they breed, so we want to do all we can to make it a good home for them.

Up the coast at RSPB Campfield Marsh nature reserve in Cumbria, the team recently introduced the lovely Belted Galloway cattle. They’re an extremely hardy and steady breed that can tolerate lots of wet weather, so they were perfect for the marsh which is home to waders such as curlew, lapwing and redshank. The Belted Galloways have fit right in, eating the rush and plodge about in some of deepest waters, and already a colony of Marsh Fritillary butterfly has returned.

Meanwhile, over on the Pembrokeshire coast, RSPB’s Ramsey Island has long used Welsh Mountain sheep and a small number of ponies to help the chough. This cheeky red-beaked member of the crow family mostly eats invertebrates in the soil and is one of the few bird species which regularly feeds directly on dung-associated insects in the dung. The grazing from the sheep and ponies is key to keeping space open for them to feed around the dung, and it seems to be working! 2019 saw 11 nesting pairs, a record year for choughs, and the team saw spectacular feeding flocks of over 50 birds on the island between July and October in 2020.

Goats and pigs to the rescue

As well as sheep, cattle, and ponies, goats and even pigs have also been key conservation allies. The team at RSPB Blean Woods nature reserve found their scrub was developing into woodland, which would risk losing specialist heathland species such as the nightjar. After much researching the reserve team came across the native, hardy breeds of Bagot and Golden Guernsey Goats, and a few years ago the team started recruiting kids from a nearby farm. What started with just five goats grazing the heath, has now built up to a herd of 25!

The RSPB has also called on the services of Mangalitsa and Berkshire pigs at Arne nature reserve in Dorset to restore heathland spaces, and these mini bulldozers have helped to make the reserve a more suitable home for everything from stonechats and Dartford warblers to smooth snakes and sand lizards.

The right breed for the right place

Our priority is always to find the right grazing animal for the right reserve, meaning the one that will be best for the species that need that habitat to thrive. If we can do this using native breeds, then that is ideal, but that isn’t always possible due to difficult time frames, suitability, or sourcing native livestock breeders in the right locations.

We always look for opportunities to work with native breeds where possible, however, such as the Dartmoor ponies arriving at The Lodge earlier in April.

Updates on the ponies

We look forward to hearing how the ponies are settling in, so check out The Lodge’s twitter feed for updates at @RSPBTheLodge. If you’re in the Bedfordshire area you can visit and see if you can spot Kevin nipping on some brambles, or Pook ambling through the gorse. Be sure not to approach or feed them, however – they are semi-wild and can get frightened, and extra food can be very damaging to their health.

You can also get a Dartmoor pony pin to share your pony pride on the RSPB’s eBay shop, with all profits going to help protect wildlife and the wider countryside