When you picture a rainforest, what do you see? Is it a humid, tangled jungle from faraway lands? Well, we have our own rainforests right here in the UK. We’re celebrating the rainforests of Wales and Scotland - rich habitats home to many species of plants, lichens, insects, birds and mammals.

Come with us and discover some of the creatures that depend on this precious habitat, and crucially, why we must protect it before it’s too late.

If you go down to the woods today...

Temperate rainforests are beautiful, rare places of mild winter temperatures, warm summers and frequent rain. They’re so rare in fact, they’re globally threatened. In the UK, you can find areas of rainforest to the west of Scotland and north Wales, as well as pockets in the Lake District and south-west England.

These temperate rainforests are made up of hazel, oak, ash, birch and Scots pine trees, intermingled with open glades and deep river gorges. Thanks to their damp, mild conditions, the rainforests provide habitats for all kinds of ferns, fungi, mosses and lichens, many of them now rare.

These forests are also fantastic carbon sinks, locking carbon away, while also supporting the local communities around them with eco-tourism, wildlife watching and escapism.

These forests are fantastic carbon sinks, locking carbon away, while also supporting the local communities around them with eco-tourism, wildlife watching and escapism.

Here are just a few species that call these forests home: 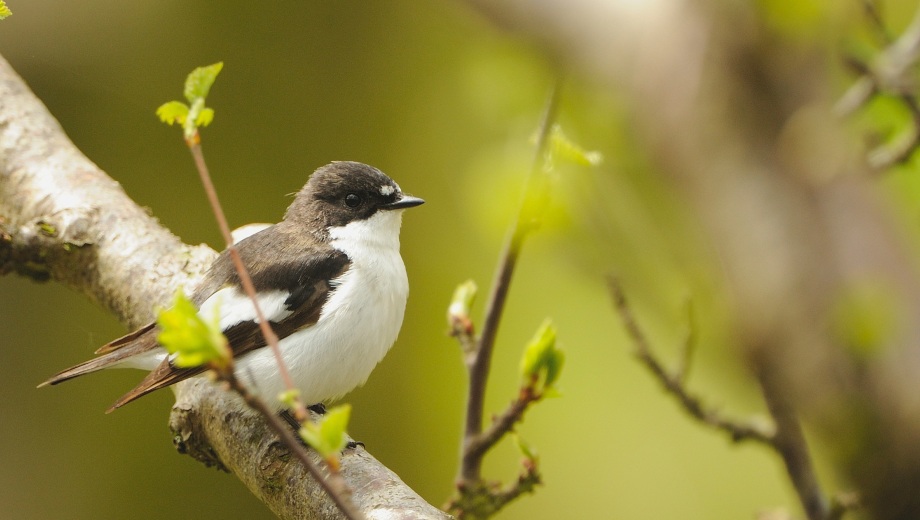 Pied flycatchers are small black and white birds that are mature oak and temperate forest specialists. They thrive in damp, mild conditions, such as those found in our rainforests. Pied flycatchers are summer migrants, coming to the UK between April and October to breed, before winging back to central Africa for the winter.

While here, they perch on select branches, keeping an eye out for flying insects, which they snatch from the air with a quick dart. Although pied flycatchers have moved from the Red to the Amber list of birds of moderate conservation concern in the UK, their future is far from secure.

The lichen lungs of the forest

Did you know that Britain hosts 2000 species of lichen? One of the largest is the marvellous tree lungwort. This lichen has large, almost leaf-like lobes, which can stretch out from the trunk of a tree invitingly. In medieval times, monks believed its resemblance to lungs was significant, and used it to treat lung complaints. 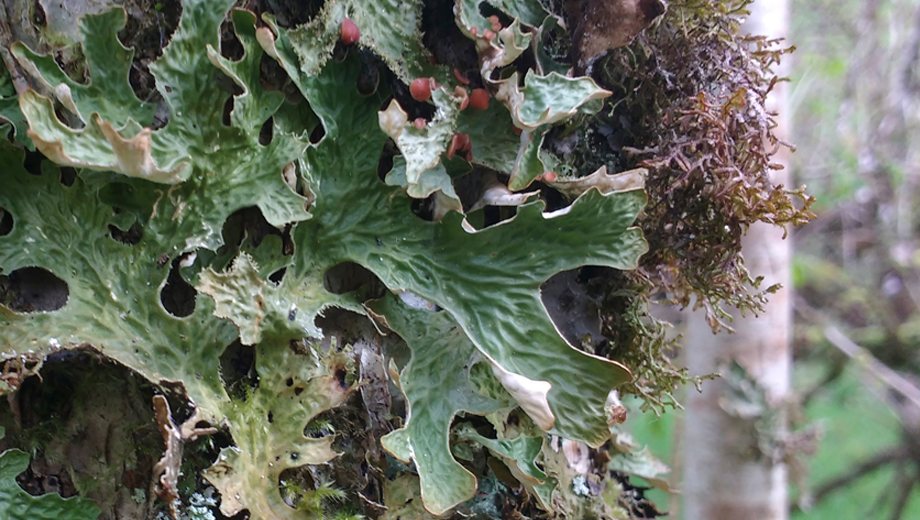 Today, although tree lungwort is found in the south of England, its stronghold remains in the Scottish and Welsh rainforests. Lichens are fascinating, complex life forms, made of two separate organisms (a fungus and an alga). They make a strong team, providing each other with food and protection. To lose tree lungwort from our forests would be devastating, yet they are threatened. Invasive Rhodendron ponticum, air pollution, and ash dieback are endangering the host trees these lichens depend on.

A small butterfly speckled with brown and orange, the chequered skipper butterfly enjoys the damp, grassy habitats and open glades along the fringes of Scotland’s rainforests. The rich soil produced by the forests creates lush growth of the caterpillars’ favourite food: purple moor-grass, while the adult butterfly sips on bluebells, bugle and marsh thistle, which can also be found in and around Scotland’s rainforests. 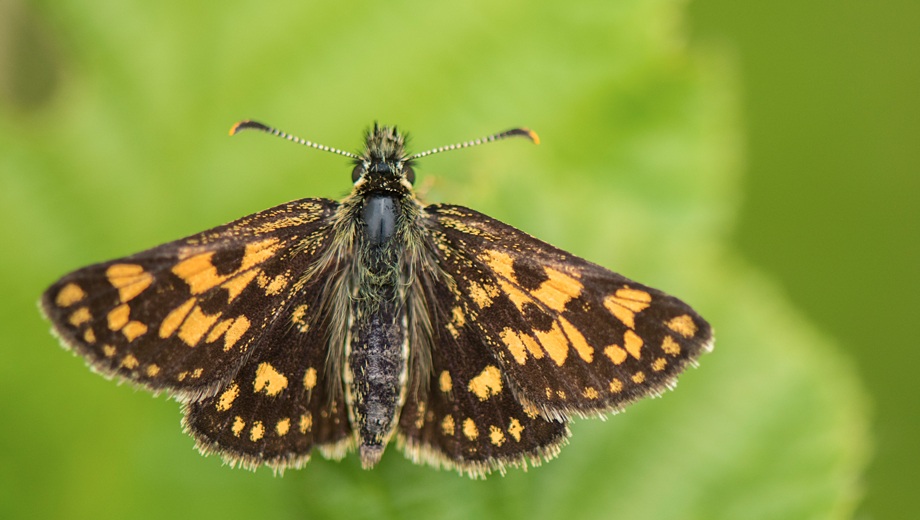 However, the chequered skipper is now struggling, like so many other UK butterflies and moths. It has declined by 44% since the 1970s, and now largely remains only in Scotland, with a recent reintroduction in Northamptonshire, England. This is due in part to overgrazing by deer, which reduces the plants the insects eat, but also due to inappropriate planting of non-native conifers, which can fill the open glades the butterfly needs.

A flash of russet through the trees

Red squirrels can be found scurrying from branch to branch in many of our rainforests. Smaller and daintier than their grey cousins, red squirrels have tufty ears. You can sometimes spot their large, messy nests, or dreys, high up in the trees.

These native squirrels snack on seeds, particularly from pine, spruce and larch cones, as well as nuts, berries and even fungi. Red squirrels are adept at telling a good nut from bad, and can assess it simply by shaking it in its paws. In the autumn, red squirrels have a curious habit of hanging mushrooms on branches to let them dry out for winter storage!

And finally, if you’re lucky, you might just spot another rare and elusive creature in a Welsh or Scottish rainforest. A glimpse of chestnut brown fur, a flash of a yellow cravat, and just a peek at a bushy tail. Of course, it’s the pine marten. 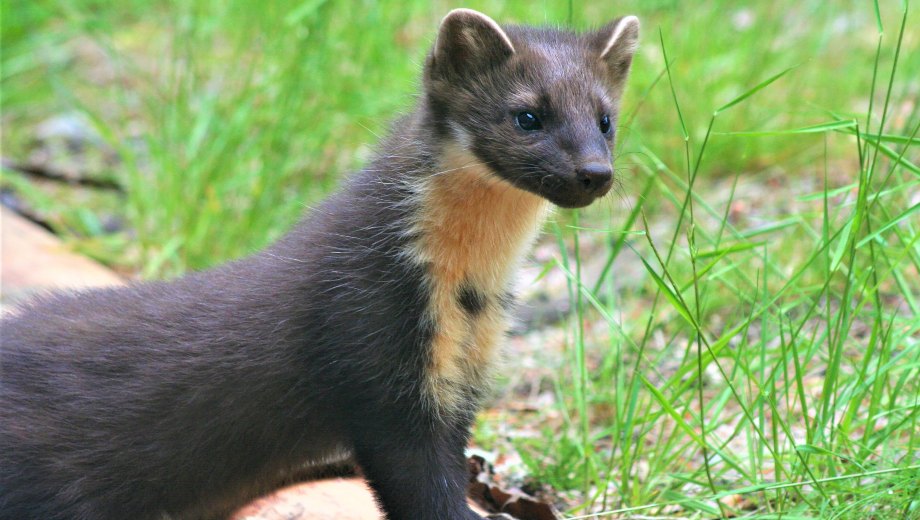 These shy mammals are fantastic climbers, living in holes in trees and old squirrel or bird nests. Pine martens can live up to 10 years, having litters of 3-5 kits each year. Historically, pine martens were Britain’s second-most common carnivore, until they were hunted almost to extinction. Thankfully, they’re now making a tentative comeback.

Pine martens feed on insects, fruit, birds’ eggs, and even small rodents. Pine marten recovery is even thought to be helping red squirrel numbers to increase. The smaller red squirrels are faster than grey squirrels, with some evidence suggesting that while the reds can outrun the pine martens, while the greys aren’t so lucky .

UK rainforests are in danger

Our rainforests are a rich tapestry of life. It's vital we protect them for all the species that call them home, preserve the carbon they suck up and store, and so local communities can continue to enjoy them.

That's why projects such as Saving Morvern’s Rainforest and Celtic Rainforests Wales are so exciting.

Thanks to some funding from NatureScot and private trusts we aim to start a Saving Morvern’s Rainforest project which will focus on 850 hectares of native rainforest restoration, and the removal of invasive rhododendron. However, more funding is required before work can begin in full.

The Celtic Rainforests Wales project, funded by the EU-LIFE fund and the Welsh Government, is prioritising similar woodland management. Non-native invasive plants will be removed while careful grazing will be introduced to a number of sites.

Both projects are long-term initiatives involving local people – contractors, volunteers and visitors alike. If more projects such as these receive support, then our beautiful temperate rainforests, and the wildlife that lives within them, stand a good chance.

Find out more about this stunning habitat here: