The Amazing Evergreens of Christmas

Evergreen plants are the SAS of nature, standing tall in defiance of whatever our long, dark winter months can throw at them. Snow? AGAIN. Frost? AGAIN! Awful swirling freezing drizzle whipping your face like a thousand small knives. AGAIN, AGAIN, AGAIN!

For thousands of years we have celebrated their tenacity, their vigour and their seemingly magical ability to keep their leaves as other plants shed theirs. For this reason they have become a symbol of hope and everlasting life for many mid-winter and religious festivals and ceremonies. But it is not just us, our wildlife also embraces evergreens at this time of year, grateful for the shelter and food they offer.

Below is a look at these amazing evergreens, the myths and symbolism which surround them and how they help some of our wildlife through the coldest time of year.

This mysterious plant has been revered by people for millennia. For the Romans and Greeks it was a symbol of peace and friendship while ancient Norwegian and Scandinavian tales portray it as a symbol of love. For the Druids it promoted fertility and life and was especially revered if it was found on oak, which is very rare. It may be that these ancient ways combined to create the tradition we know today, of sharing a kiss at Christmas beneath the mistletoe bough. 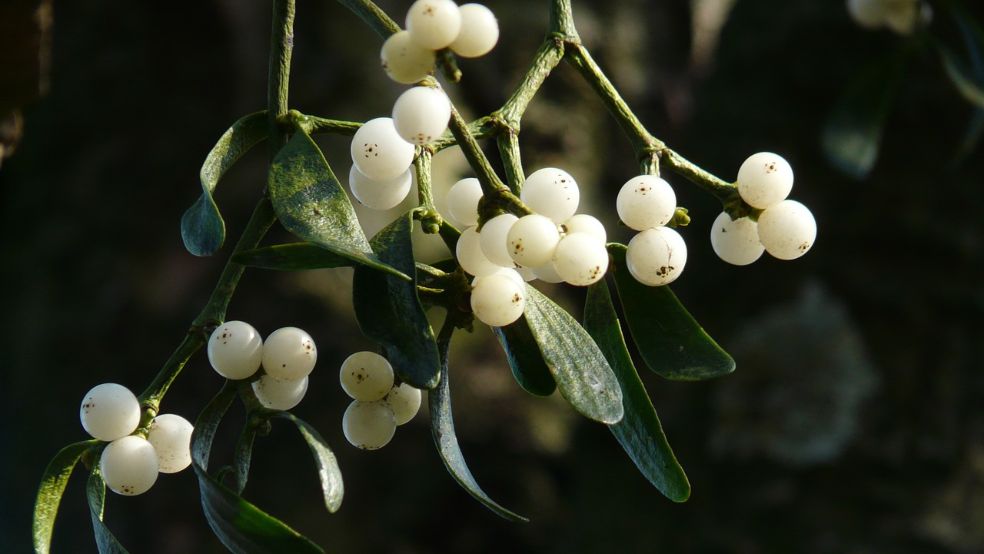 Mistletoe grows high in the branches of trees, especially the apple, lime and hawthorn in the UK. In winter its white sticky berries provide food for several birds such as redwings, fieldfares, blackcaps and of course mistle thrushes, whose Latin name literally means mistletoe eater. When they feast on the berries, they often wipe their beaks, spreading the sticky seed onto branches where it may germinate.
After you have finished kissing under it this Christmas, why not play the role of a bird and spread the seeds onto the branches of an apple, lime or hawthorn tree - the birds will thank you for it if it grows!

Holly has long been associated with midwinter traditions – the Romans often gave it as a gift at Saturnalia, their winter solstice festival honouring the god Saturn. Pagans also revere the tree as a symbol of fertility and for its ability to ward off evil spirits. For Christians it is a symbol of Christ’s crown of thorns, the red berries his blood and its evergreen leaves a sign of life after death. 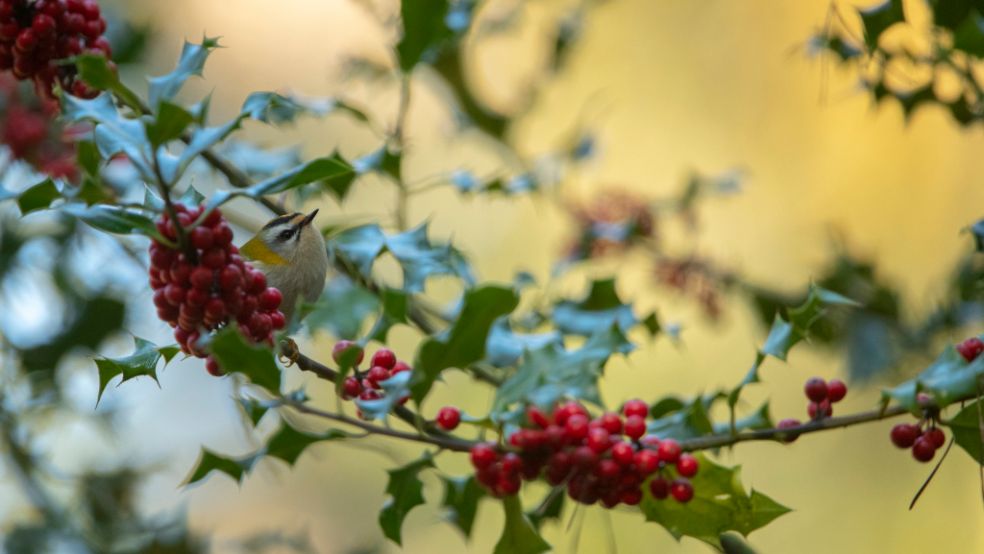 Many birds love snacking on holly berries, including blackbirds, wood pigeons fieldfares and redwings. Mistle thrushes have even been known to guard a good bush to keep it for themselves! As well as birds, mammals such as mice and squirrels will also eat the berries and some birds such as goldfinch choose to roost among its prickly, densely packed leaves.

Holly trees are easy to grow and can be easily shaped for any garden size. Only the female tree has berries, but you need both male and female trees close by for the berries to form.

Ivy had a special place in winter celebrations long before it appeared in carols. Its ability to entwine and bind are celebrated in folklore as a symbol of love and friendship and like holly, it was also used to guard against evil spirits. Both were also a reminder of life and hope in the darkest months and that spring would soon follow. For the Romans, wearing a wreath made of ivy was thought to prevent you getting drunk and the Roman God of wine and festivity, Bacchus, was often pictured wearing one.

Ivy is brilliant for wildlife. Its berries are exceptionally high in fat making them a fantastic food source for several birds during winter, including thrushes, woodpigeons, and blackbirds. They also ripen over a long period, providing food from November until April. 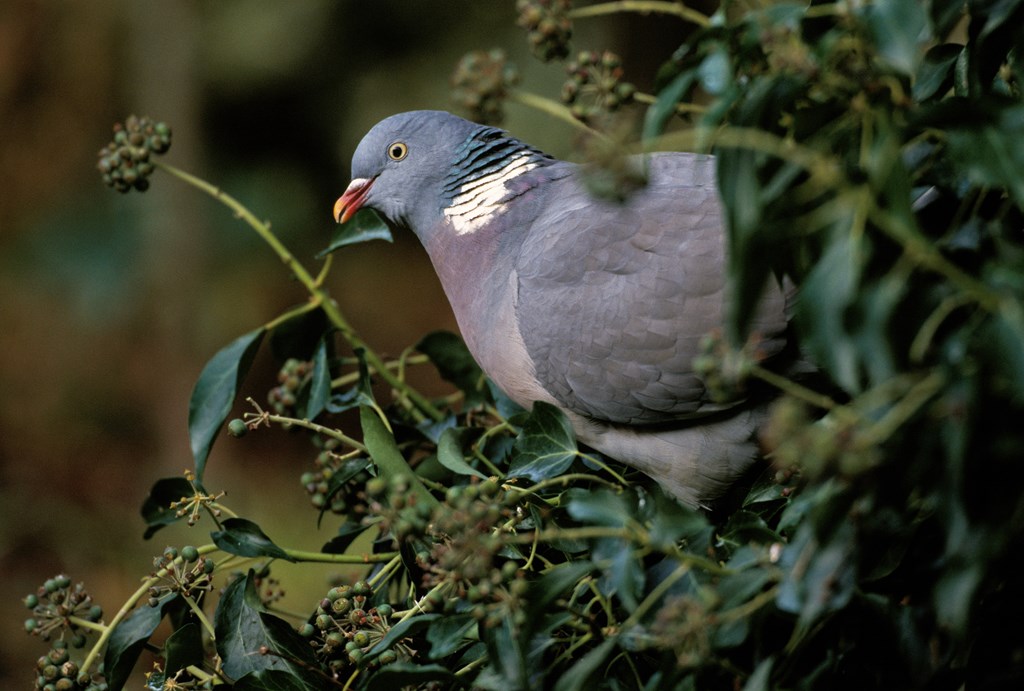 Its flowers’ pollen and nectar are vital food for some insects, such as queen bees and wasps just before they go into hibernation. Many other insects shelter or hibernate within its entwined vines and evergreen leaves, as do bats, birds and small mammals.

To maximise the benefits of ivy, don’t prune too heavily, to allow its flowers and berries to grow.

These evergreen trees have long been associated with reincarnation and immortality because of its ability to put down new shoots and live for thousands of years. The Romans celebrated the tree as part of their Saturnalia festival and in Germany yew boughs were traditionally brought inside and decorated at Christmas time. Queen Charlotte, who was born in Germany and married King George III, is known to have displayed a decorated yew as a Christmas tree in the late eighteenth century, beginning the modern British tradition of Christmas trees.

For wildlife, the yew offers shelter and protection within its dense evergreen leaves and branches. The tree produces fruits known as arils which look like strange berries. These are guzzled by a range of wildlife including blackbirds, mistle thrushes, squirrels and dormice. Its needles are eaten by hawfinches which increase in number during some winters as small flocks migrate from the continent. 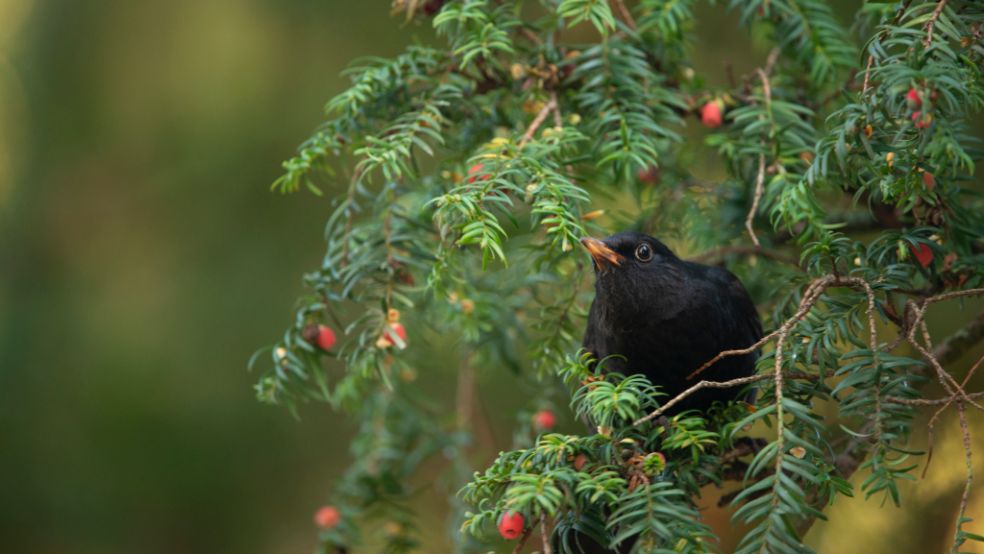 The tradition of Christmas trees builds on the ancient tradition of celebrating midwinter with evergreens, but the custom as we know today began in Germany around 500 years ago. Although Queen Charlotte brought the idea of decorated trees to the UK, the idea really took off in Britain when the German born Prince Albert married Queen Victoria and by 1841 the custom was widespread amongst the wealthy. Nordmann Firs and Norway spruce are now the most common Christmas tree, with Norway traditionally donating a tree for London ever since 1947. 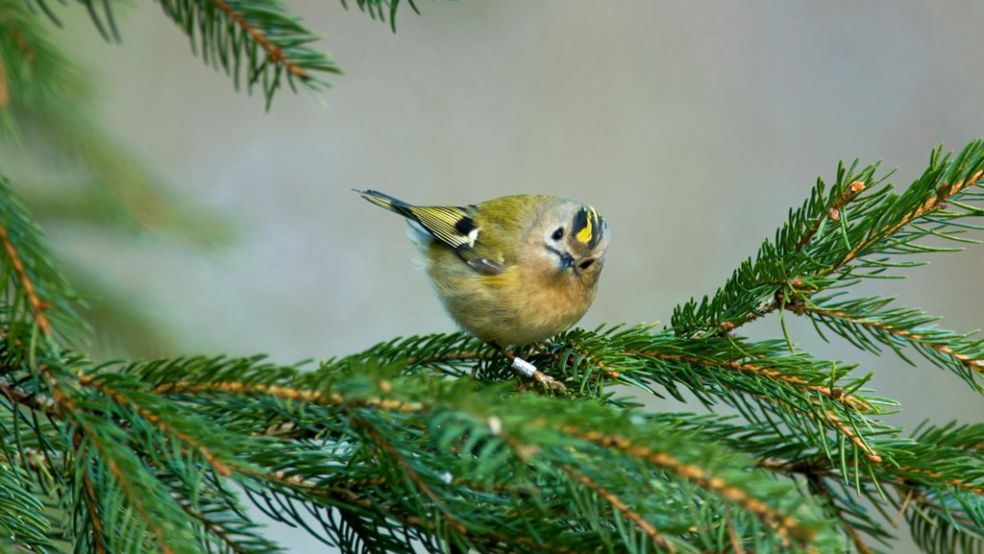 As with other evergreens, the Norway spruce and Nordmann fir provide shelter for wildlife during the freezing winter months. Our smallest bird, the goldcrest can often be found among their branches as can coal tits. These two tiny birds are adept at feeding on the insects hidden away between the needles, so much so that the highest populations of goldcrest are found in spruce, despite it not being a native of the UK. The common crossbill will feed on the spruce’s seeds as will the red squirrel, carefully picking them from the cones.