After decades of hard work to reintroduce this species, there are now over 100 breeding pairs in Scotland, including two new chicks.

This year, for the first time, we're following one breeding pair as they undergo the trials and tribulations of raising chicks. Come with us and discover the hopeful story of Shona and Finn as they raise their new offspring.

A troubling history for white-tailed eagles

Around 300 years ago, white-tailed eagles were a common sight. But, as deft hunters, they were persecuted by gamekeepers, fishery owners and shepherds, as well as collectors. The hunting continued unchecked and, in 1918, the last white-tailed eagle in the UK was killed, rendering them extinct in this country.

Fast-forward 50 years, and a small but determined reintroduction programme was established. White-tailed eagle chicks were relocated from Scandinavia and released in Scotland. Progress was slow, but finally, in 1985, one pair bred successfully on the Isle of Mull. Was this the long-awaited change in the white-tailed eagle’s fortunes?

Today, there are over 100 breeding pairs of white-tailed eagles in the UK. They mainly live in Scotland, on Skye, the Western Isles, and inland, at our reserve at Loch Garten. And it’s here Shona and Finn are busy raising two chicks, as we speak.

In this clip, at around ten weeks old, you can watch the chicks feed as a parent brings in some food:

A pair of white-tailed eagles have successfully hatched two chicks at RSPB Abernethy. Here at around ten weeks old, you can watch the chicks feed as a parent brings in some food.

The newest members of the family

On the 4th and 8th of March 2022, Shona laid two eggs in their nest, or eyrie, high up in a tree on the RSPB Loch Garten reserve. For the first time, we installed a camera in autumn, before the pair occupied the nest. This gives us a bird’s eye view of the nest and the goings on within.

Most breeding white-tailed eagles mate for life, forming bonds when they’re four or five years old, and returning to familiar nests most years. Shona and Finn have been attentive, tending to each other as well as their chicks. During incubation, Finn was particularly nest-proud, tidying twigs and bracken back into place.

Shona did the majority of the incubation, as is common with white-tailed eagles, occasionally swapping with Finn. The duo even had to keep the two eggs warm through snowfall at the end of March. Happily, on the 8th and 11th of April, both eggs hatched.

“Being able to show the public the intimate lives of one of the most iconic British birds is a rare privilege that amazes both our staff and visitors alike. Watching the personalities of these chicks develop drives to heart of what conservation of these species is all about.” Fergus Cumberland, Visitor Operations Manager.

As well as being majestic birds, white-tailed eagles are fascinating. Like so many bird species, they have some interesting parenting techniques. 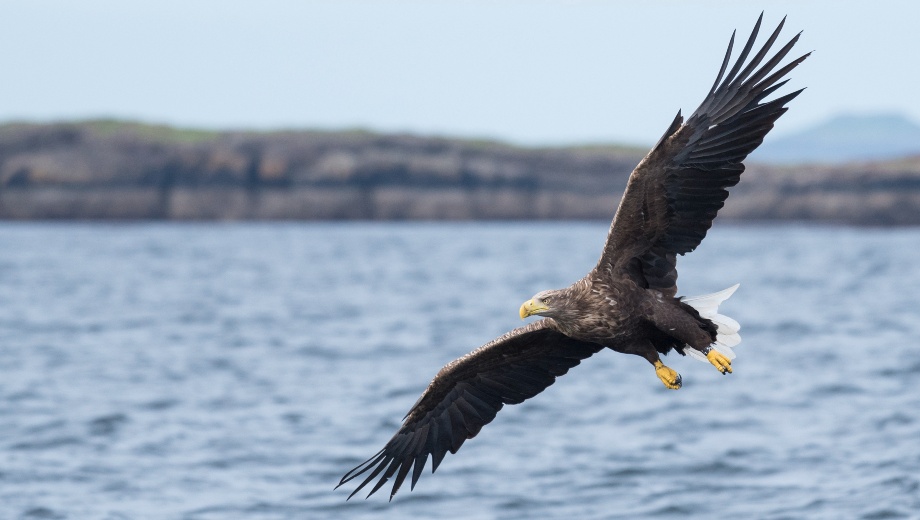 White-tailed eagle parents are adept at communicating with their offspring, using one call to alert their chicks to predators, encouraging the chicks to hunker down to safety in the nest. The other call is reserved for food deliveries, causing the chicks to respond with pleading, hungry cries.

As a result, Shona and Finn’s chicks are bulking out nicely, growing strength and confidence. They totter around the nest, often with a beady eye on the lookout for a food parcel from Mum or Dad.

White-tailed eagle chicks even have a special way of keeping their nest clean, without the risk of falling by venturing to the edge. Instead, a chick will stand up, angle its bottom to the sky, and propel the droppings into the air and over the side of the nest, with extraordinary velocity and aim!

White-tailed eagle chicks typically remain in the nest for 70-75 days, which gives these two chicks a very rough fledging date of the 25th June. Watch this space!

The eagle impact on Mull island

“The number of people that have been visiting Scotland to see white-tailed eagles gives us a glimpse into how excited people are, similar to when ospreys returned in the 60s. People sharing in the wonders of the natural world is how we are going to fight to save our planet.” Sonya Lole, Visitor Experience Officer.

The sea eagles’ return to Scotland is fantastic news, not just for wildlife, but also for people. From excitement and awe comes a desire to protect endangered species such as white-tailed eagles. As Sonya explains, communities working together to provide safe habitats for these species is crucial in their ongoing battle. Conservation work, such as the longstanding reintroduction programme for white-tailed eagles, as well as the fight to protect their habitats and hunting grounds, is crucial if we are to help this species thrive.

The community of Mull has seen a large increase in the number of tourists coming to the island to spot white-tailed eagles. Every year, thousands of wildlife enthusiasts visit, keen to spy the sea eagles, and boosting the local economy while they’re there.

Find out more from the Isle of Mull in the following video:

Find out more from the Isle of Mull in this video

Follow RSPB Loch Garten on Facebook and stay up to date on the latest sneak peeks from Shona and Finn’s nest.