Why the fate of a crucial Portuguese nature reserve for migratory black-tailed godwits hangs in the balance.

Find out why the RSPB and other international NGOs are battling against a proposed airport development next to a habitat hotspot for 300,000 birds. 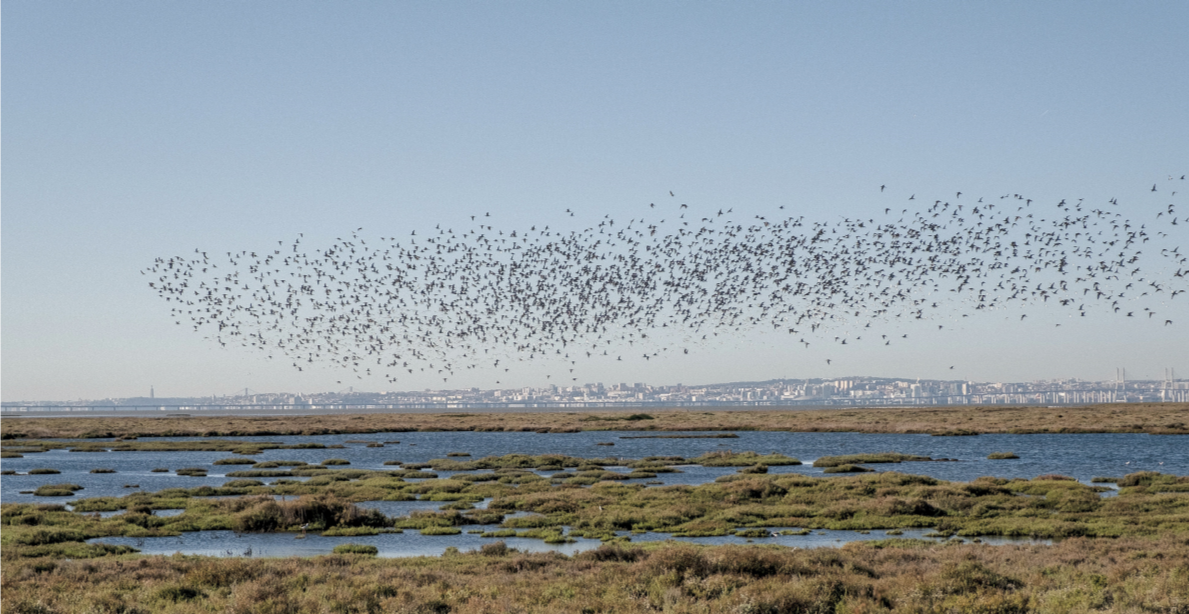 Black-tailed Godwit flock near a high-tide roost within the Tagus Estuary, with Lisbon in the background (photo: Ernst Schade ©ernstschade.com)

The Tagus Estuary near Lisbon is one of the most important coastal sites along the East Atlantic Flyway migratory route. It's a popular site for waterbirds, supporting around 300,000 every year, including over 60,000 black-tailed godwits. A large, protected reserve, the estuary is a key stopover point on the black-tailed godwits’ migration between West Africa and the UK. It is an essential place for these birds to rest and refuel for their epic onward journey, but today, this sanctuary is under threat (1).

Why is the Tagus reserve so important?

Designated as an Important Bird and Biodiversity Area (IBA) by BirdLife International, the Tagus Estuary is also a Special Protection Area (SPA) under the EU Birds Directive, and a Wetland of International Importance under the Ramsar Convention on Wetlands. Despite this, the Portuguese Government is proposing to build a new airport right next to the estuary. This is bad news for the birds that visit the site.

Migratory journeys can be long and complex, with birds often flying for hours at a time in challenging weather conditions. When they finally stop for a break, finding a safe place to forage and rest is crucial if they are to build enough energy for the next leg of their journey.

The construction of an airport directly beside the Tagus Estuary would bring noise and light pollution, both during construction and as an ongoing effect of a busy airport. There would also be an increased risk of birds being hit by aircraft, ultimately making the estuary less safe and less attractive for migratory birds. 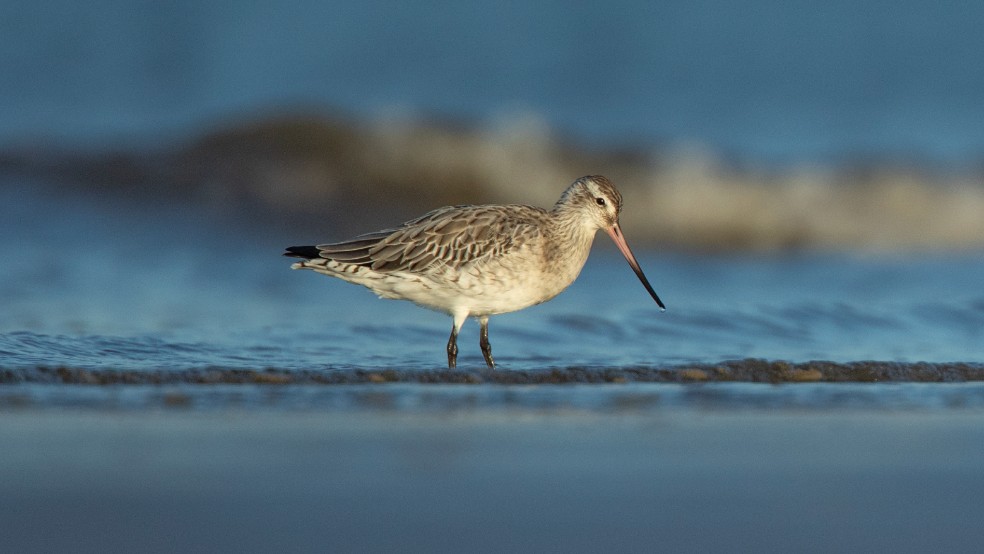 Why black-tailed godwits need our help

Tall waders with an extraordinarily long beak, black-tailed godwits are social birds, forming large flocks and pairing for life. The small population of breeding birds in the UK nests mainly on wet grasslands in the Fens of eastern England, but 97% of their wetland habitat has been lost to agriculture.

Black-tailed godwits became extinct in the UK in the 1800s, eventually returning in the 1940s and increasing to a peak of 65 breeding pairs in the 1970s. Today, however, there are fewer than 60 pairs breeding in England, putting them on the Red List of birds of highest conservation concern in the UK.

We're working with the Wildfowl & Wetlands Trust (WWT) on the six-year Project Godwit to increase the population of breeding black-tailed godwits in the UK. But with this species already struggling here, a further threat to them in the important Tagus Estuary could mean fewer birds returning to the UK to breed, making the battle to save this species even harder.

Colour-ring sightings suggest that at least 50% of the UK’s breeding godwits use the Tagus Estuary on migration. One of the birds ringed as a chick at the RSPB Nene Washes reserve was recently spotted at the Tagus Estuary by a team from the University of Groningen, Netherlands. She was recorded in what would be an area with the highest levels of noise pollution and disruption if the airport is built.

How we’re taking on the Portuguese government

The BirdLife International family has joined forces to support the Portuguese BirdLife partner, SPEA, and ClientEarth, the environmental law charity, to oppose the airport.

The black-tailed godwit is the national bird of the Netherlands, so the Dutch BirdLife Partner, VBN, organised a petition that was signed by over 40,000 people. Other BirdLife Partners along the East Atlantic flyway sent letters and videos of support opposing the construction.

The RSPB, through our team of scientists, conservation and policy experts has coordinated this response from the BirdLife Partnership. We're also helping SPEA to lodge formal complaints, highlighting the Conventions, Agreements and Treaties that are there to protect our ever-decreasing wildlife.

An RSPB report, compiled specifically for this case, finds that waders from over 30 countries across Europe and West Africa use the estuary, and suggests the impact of the new airport on birds could be far worse than predicted.

We strongly believe these impacts have not been properly assessed by the Portuguese Government, as they have failed to consider the wider consequences for migratory birds from across Europe and West Africa that use the Tagus Estuary. It’s so important that this case is heard by a much wider audience.

The scale of the problem

We launched our Black-tailed Godwit Appeal in February 2021 and through your generous contributions we were able to dedicate a scientist to analysing data from across Europe and West Africa, including data from our own Project Godwit and produce the vital report for the court case.

The report revealed around 300,000 waders from over 30 countries visit this estuary as well as other key sites, including:

We believe the airport’s negative impact would severely reduce the appeal of the Tagus Estuary for birds migrating between Europe and West Africa. Therefore, any impact on this reserve would affect many other sites too, having a far more widespread impact than the Portuguese Government states. 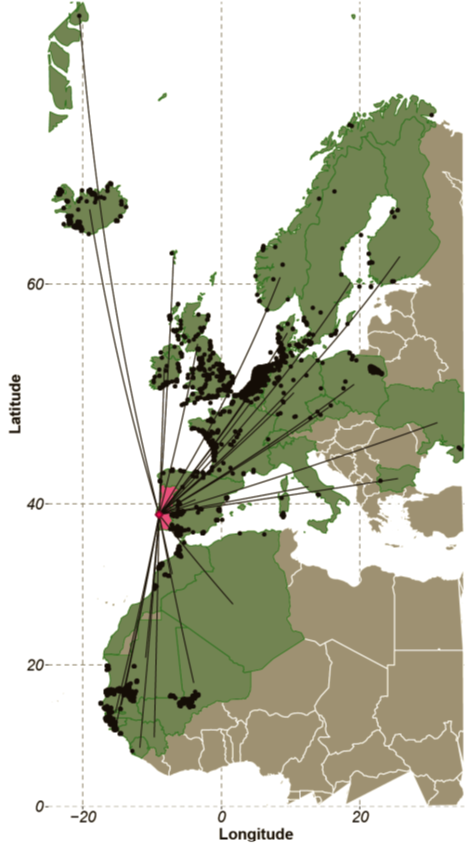 Figure 1. The international flyway connectivity of the Tagus Estuary is shown here, indicating the 30 countries linked by the estuary’s waders. Note: a connection with Canada is not shown for graphical purposes.

Your support makes this possible

The court case is likely to continue for the rest of the year, and we will continue to fight the development. Our involvement in this crucial case wouldn't be possible without your support. Your membership and donations to the RSPB mean we can carry out our vital conservation work to protect and save black-tailed godwits and other wildlife under threat. Thank you.

If you’d like to help us again, discover how we’re currently working to secure a future for migratory birds. These wonderful wanderers are in trouble, but together, we can save them.

Find out more about Project Godwit

Project Godwit is a partnership between RSPB and WWT with major funding from the EU LIFE Nature Programme, the HSBC 150th Anniversary Fund, Natural England, the National Lottery Heritage Fund through the Back from the Brink programme, Leica and the Montague-Panton Animal Welfare Trust.

Find out more about Project Godwit

Project Godwit is a partnership between RSPB and WWT with major funding from the EU LIFE Nature Programme, the HSBC 150th Anniversary Fund, Natural England, the National Lottery Heritage Fund through the Back from the Brink programme, Leica and the Montague-Panton Animal Welfare Trust.

Why black-tailed godwits need our help