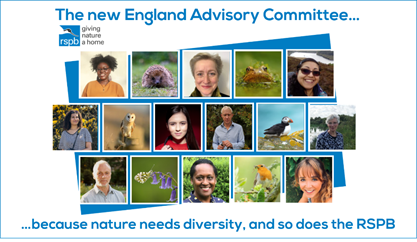 The RSPB has today announced their new England Advisory Committee, pledging to “harness the power of diversity and representation” with ten new members set to guide the future plans for the RSPB across the country.

The committee’s creation comes as a recent RSPB report, titled Recovering Together (1), showed that just 34% of people in households without any outdoor space (be that a garden, courtyard, or balcony) are within a 10-minute walk of publicly accessible natural greenspace.

Since the global pandemic began, the conservation charity has noticed a significant rise in people connecting with the nature around them. As their report shows, increasing access to nature rich spaces for all is a “pressing concern”.

An opportune moment, the RSPB, which works across a range of communities and habitats, has now announced their new England Advisory Committee. Ensuring that the ten new members are from a vast array of backgrounds, experiences and skills, the charity hopes that the committee can help join the RSPB in protecting nature and increasing people’s access to it.

The new members include Mya-Rose Craig, the 18 year old ornithologist and diversity campaigner who has spoken with the likes of Greta Thunberg and Chris Packham and earlier this year became the youngest ever recipient of an honorary doctorate in science from the University of Bristol. Joining her are Jake Fiennes, wildlife friendly farming ‘trailblazer’, and adventurous Zoologist, Author and Science Communicator Sophie Pavelle (Or ‘SophiePavs’ as she’s known on social media) who has an Instagram following of 11.7k alone.

The RSPB England Advisory Committee’s purpose will be to support, guide, and champion the work of the conservation charity, including its work in managing over 100 English reserves for wildlife.

We are excited and hopeful that with such a brilliant and diverse mix of voices, passion and knowledge, our new Committee can really help to make a lasting impact on the way we work at RSPB England and help to drive new nature connections with nature rich spaces.”

The RSPB, in its newly launched Revive our World campaign, is demanding that more must be done to protect the country’s greenspaces and wildlife and to create communities richer in nature, after a recent report showed that the UK had suffered a ‘lost decade’ (2) in nature recovery.

Speaking of the campaign, Emma continued: “Nature needs everyone to help join the fight to revive our world at a time where our governments are failing us and the fight for nature intensifies.”

Go to RSPB.org.uk/ReviveOurWorld to join the call for action.

For further information and to arrange an interview, please contact:

The Royal Society for the Protection of Birds
The Lodge, Sandy, Beds SG19 2DL