Swifts in a Tower

First published in 1956, Swifts in a Tower is an iconic book, providing astonishing insights into the private lives of swifts. Andrew Lack describes how more than sixty years on, the book is taking on a new life.

My involvement with swifts dates from my earliest years when my father came home with an enormous bandage around his thumb that had gone septic as a result of being scratched by a swift. The Latin name of the swift, Apus, may mean ‘no feet’, but don’t believe it – they are not only strong with sharp claws, but also remarkably flexible, needed for hanging onto steep surfaces where they frequently nest.

Tower-nesting swifts
When I was about ten years old, my father took me up the tower of Oxford University Museum for the first time to see the swift nesting boxes. The long ladder that led to the first floor bounced alarmingly but you were careful and I know of no accident that ever came to anyone going into the roof in those years. Nowadays, you don’t have to climb the tower to see these birds - people from across the world can follow the fortunes of the Oxford swifts, thanks to a live video link.

My father’s book, Swifts in a Tower, dates from 1956 and was a summary of all that he and his assistants had found out during the previous eight years or so, spending days and weeks cooped up in the claustrophobic darkness of the tower during the swift breeding season. The swifts have been monitored ever since, mainly by Roy Overall and George Candelin, and almost all the fledglings have been ringed over more than sixty years, although, surprisingly, very few have ever returned to the tower to breed.

A classic updated
The book has been seen as a classic and long out of print. With the ‘Oxford Swift City project’ coming up it was an opportunity to re-publish. And we have learned a few more things about swifts since 1956. We know more about their migrations, their behaviours and their speed of flight – a verified speed of nearly 70 mph in powered flight is the fastest ever recorded. We can also report on their ups and downs in numbers; sadly downs in recent years that has rightly alarmed many people who feel, as Chris Perrins says in the book’s foreword, that the summer cannot be complete without screaming swifts around. 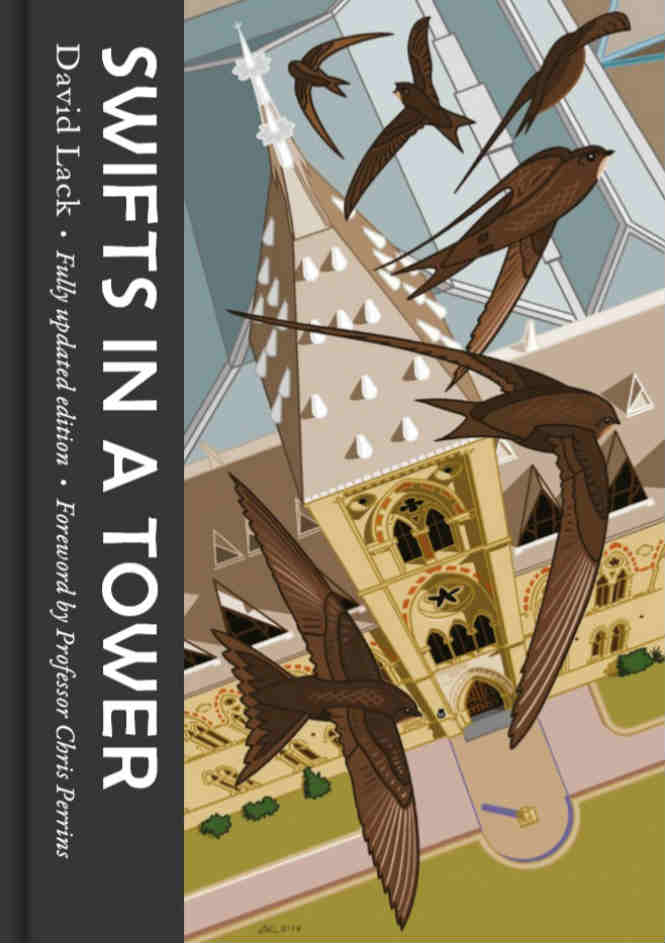 My job was to summarise all the work since 1956, involving work from several parts of Europe, Africa and China as well as the stalwart colony in the Oxford University Museum. We were so lucky to get such lovely new illustrations for it – unpublished photographs from Manuel Hinge, Steve Blain and Colin Wilkinson and Colin’s artistic skills for the cover, inside-flap drawing and line drawings.

Swift connections
For me, getting involved with swifts directly was not only fascinating, but a living connection with both my parents, as my mother spent much time watching the swifts before I or my siblings were born. She spent longer actually up the tower than my father did. I think they were bound to get married after sharing this study over several years… Perhaps I owe my existence, in part, to the swifts in the tower.

The updated and reprinted Swifts in a Tower is now available. If purchased from the RSPB shop website 100% of the cost will go towards the Oxford Swift City project.

The book has been republished with support from the Heritage Lottery Fund.