From breakfast to bedtime, every day is action-packed when you’re an albatross. Have you heard about their delightful dancing? Their globe-hopping gliding? Or their mature matriarchs? Today, come and see what it takes to live as a winged giant.

Hold on tight, it might be a bumpy ride. While we’ve seen some incredible successes on our journey so far, out of 22 species of albatross, 15 are still in danger of going extinct.

So spread your wings and discover the risks they face, the journeys they make, and the people who, with your support, are helping to protect them. 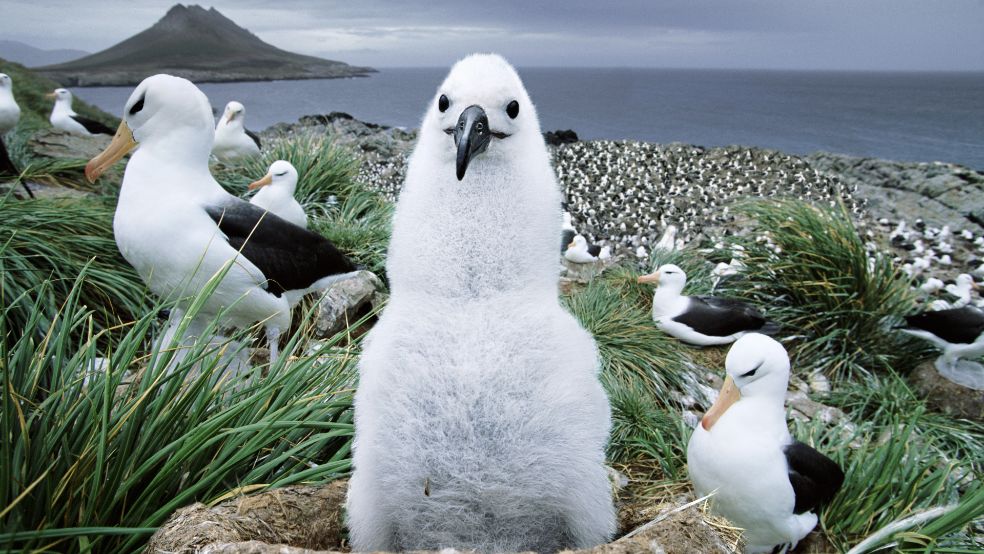 For albatrosses, the morning alarm clock is the chatter of the hundreds of neighbouring parents and chicks who make up the colony. You’ll find most of these albatross groups scattered on coastal outcrops somewhere within the Southern Hemisphere. For them, it’s home-sweet-home, as albatrosses will return to the same nesting grounds they fledged from as chicks.

Sure, you might not have spotted one at your bird table, but did you know that one third of breeding albatrosses live in UK waters? That’s because some of their favoured nesting grounds happen to fall in UK Overseas Territories. So, it’s up to us to look out for them.

With albatrosses often living beyond their 50s, the colonies have some old souls kicking about. In fact, the oldest known ringed bird in the world was a Laysan albatross nicknamed Wisdom, who was first ringed in 1956 – making her close to 70 when she was last spotted. And she hadn’t hit retirement just yet, instead she was successfully hatching a chick.

When it’s time for breakfast, the sound of crashing waves signals freshly churned food from the rich seafloor. And these winged giants are built perfectly for the job.

Albatrosses have the biggest wingspan of any bird with the largest species, the wandering albatross, boasting a wingspan of over 11 feet wide. For these lengthy birds, flying just makes sense, but flapping your wings is so last year. Albatrosses were using wind power way before it was cool.

By gliding in shallow arcs, these massive birds use a combination of gravity on the downward section, and wind currents on the upward section. By sailing on their enormous wings, the albatrosses use barely more energy than when sitting at their nest and can rack up more than 9,000 miles in one trip. So why not see the sights? One grey-headed albatross with particularly itchy feet took a round-the-world trip in just 46 days.

But these skilled flyers are being pushed to their limits. As time ticks by, their perfectly picked homes are less full of fish than usual. As climate change warms the oceans, the fish that albatross eat are moving to other regions, and commercial overfishing means there’s even less opportunities to catch breakfast.

Find out how you can help tackle the issue. 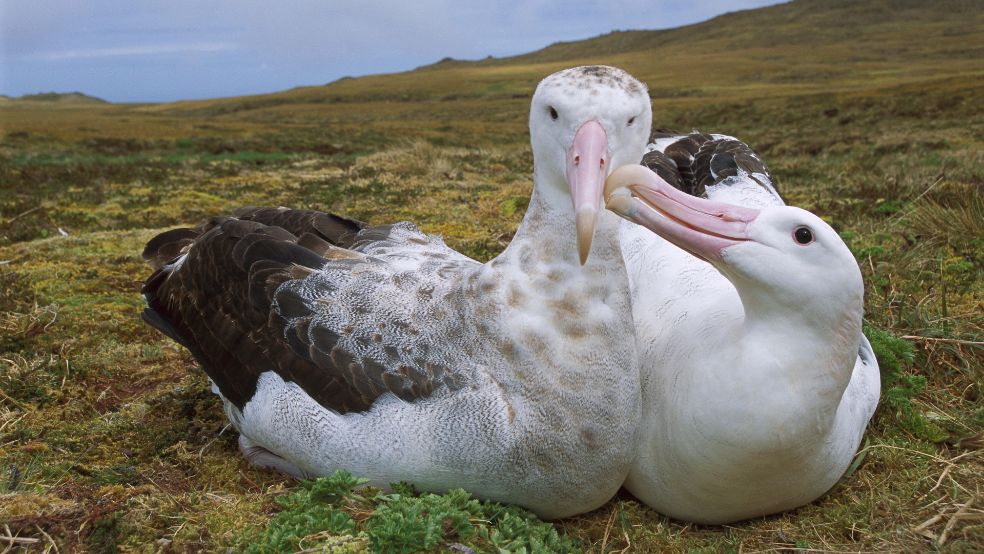 While albatrosses spend most of their days hunting alone at sea, they can be a bit of a sweetheart when they need to be. On date nights, these birds pull out all the stops.

Albatrosses perform a mating ritual that would give the Strictly Come Dancing cast a run for their money. Twisting, bowing, bobbing, and fencing, they have at least 22 separate dance components in their routine. And good choreography pays off: once they’ve bonded, the pair will usually mate for life.

Successful couples will both help out around the nest, sharing daily chores such as keeping their egg toasty. Perhaps that’s why they have one of the lowest ‘divorce rates’ of any bird.

Getting hungry again? it’s time to find dinner. Once thought to have no sense of smell at all, today we know that these incredible hunters can smell food in the water 12 miles away. And yes, you guessed it. There’s more danger ahead for our albatrosses.

Throughout albatross hunting grounds, something glimmers beneath the waves that spells disaster for our hungry hunters. To our albatrosses, some commercial fishing longlines look and smell like prey. The longlines, are many miles long and hook, net, and drown our hungry albatrosses. These accidental fishing deaths are known as ‘bycatch’ and affect over 90% of albatross species. Each supper could be the last for our albatross.

But there’s hope ahead for our feathered friends. We know that no one wants an albatross around their neck, so we’re teaming up with fishing industries to tackle the bycatch problem together. Alongside BirdLife International, we lead The Albatross Task Force.

As an international team of experts, we're improving the design and use of fishing equipment, so that fleets aren’t so dangerous to albatrosses and other birds.

Want to help us to slash bycatch numbers?

Donate to Friends of the Albatross appeal 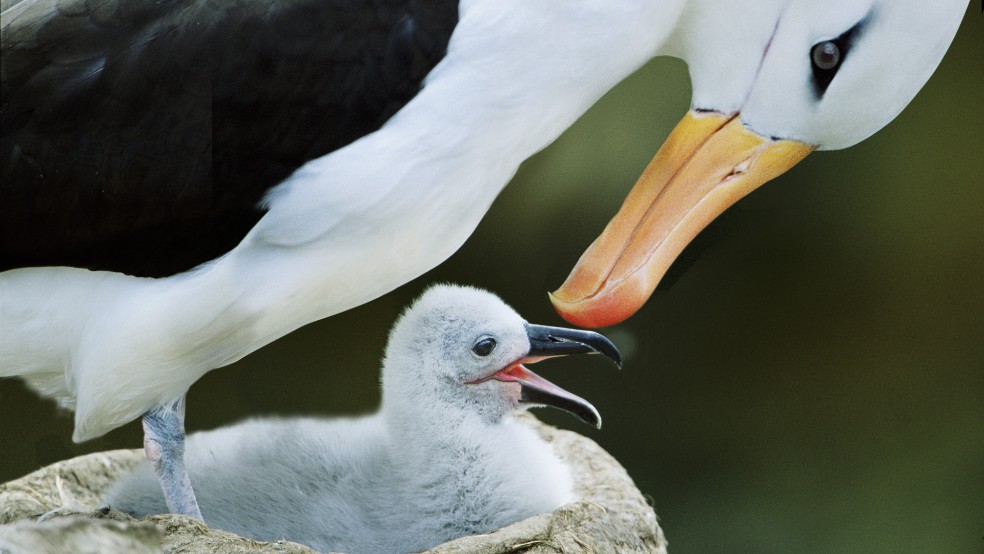 Once the parents have hatched their egg, the real parenting journey begins. Albatrosses will raise just one chick every two years, as it takes a huge amount of time and resources to nurture a chick. But sometimes it proves to be a risky strategy.

When parents need to find food, the chicks are left on the nest for weeks at a time. Although albatrosses have evolved on their remote homes mostly without predators, unfortunately tonight, the chicks may have some unexpected house guests.

On our overseas territories, like Tristan da Cunha, our albatross chicks have visitors. In a gruesome twist to their tale, mice introduced by sealers in the 19th century have turned to albatross eggs, chicks, and even adults, as a food source.

Today, a massive 62% of albatross species are affected by invasive species. Without any evolved instinct to defend themselves against these alien visitors, the chicks do little to warn their attackers away. Tragically, in the 2017-2018 breeding season, only 21% Tristan albatross chicks survived.

Thanks to your support, we carried out an enormous restoration project on Gough Island to remove invasive mice from the albatrosses’ home. Sadly, despite our immense efforts, in December 2021, we identified at least one surviving mouse. For the chicks, these efforts will still provide some much-needed respite, but our fight for their long-term safety continues. Learn how you can protect vulnerable seabirds from invasive species here.

From daybreak to dinnertime, our albatrosses are up against it. Whether its climate change, bycatch, or invasive species, it’s time we stand up for the giants of our skies.

With your help, we’re already making great leaps, and some fisheries have reduced bycatch by more than 90%. Support The Albatross Task Force to take real action and make a difference to the daily lives of our struggling albatrosses.