Birds of prey are being relentlessly shot, trapped and poisoned across the UK. Our message is clear: this killing must stop.

Why are birds of prey being killed?

Birds of prey should be free to soar, enriching our lives as well as our ecosystems. But sadly, despite being protected by law, many of these birds are being illegally killed, particularly in upland areas of the UK as a result of the conflict with driven grouse shooting.

There were 87 confirmed incidents of bird of prey persecution recorded in 2018, including the shooting, trapping and poisoning of birds such as hen harriers, red kites, peregrines and owls. Yet there was only one conviction, relating to an offence from 2017.

The Birdcrime report is published annually by the RSPB, as a summary of detected offences against birds of prey (also known as raptors) that have been collated by our Investigations Team. We know, from independent studies of raptor populations, that more incidents will have taken place undetected or unreported, and so the information in this report only scratches the surface.

As well as the RSPB’s own figures, population studies and the government’s own research show that birds of prey are particularly at risk over land managed for driven grouse shooting. On driven grouse moors, red grouse are managed in increasingly large numbers to be shot. Some birds of prey, like hen harriers, will eat red grouse chicks as well as a range of other prey, and so raptors are being systematically and illegally eradicated from these landscapes.

This culture of criminality must end and the RSPB is fighting to protect our precious birds of prey. Obeying the law should not be optional.

To find out about bird crime happening near you, visit our raptor persecution map hub.

Mark Thomas, the RSPB’s Head of Investigations UK, looks back over some of the incidents of 2018.

Raptor persecution continues and so does our fight to end it.

In the UK, incredible birds like peregrines, hen harriers and golden eagles are being illegally shot, trapped and poisoned.

This has been going on for decades and it has to stop.

In 2018 there were 87 confirmed incidents of raptor persecution in the UK.

This film looks back over some of low points from 2018 which really stood out for me and the team.

The year started with this buzzard found poisoned in North Yorkshire.

This barn owl was killed in a trap.

And in April this red kite was shot in the head and blinded.

It was clearly in pain, so sadly had to be put to sleep.

Look at the beautiful wings on this buzzard… it had also been shot.

This peregrine was also shot. It’s quite hard to look at this... what a tragic waste of a life.

This merlin was crushed in a rail trap illegally set on a grouse moor.

This buzzard was shot, but amazingly it survived, but was later killed by poison.

Another red kite... it was shot and poisoned in Nidderdale – possibly the worst area for persecution in England.

In November we filmed this person on a grouse moor, at night, with a gun near three roosting hen harriers.

Then a satellite-tagged hen harrier was found dead on the same grouse moor.

Its body contained two pieces of shot.
The RSPB’s message is clear: this killing must stop. Enough is enough.

If you’re as outraged as we are, you can help the RSPB’s Investigations team by signing up to our bird of prey appeal.

Your support will help us continue to shine a bright light on this very dark issue. 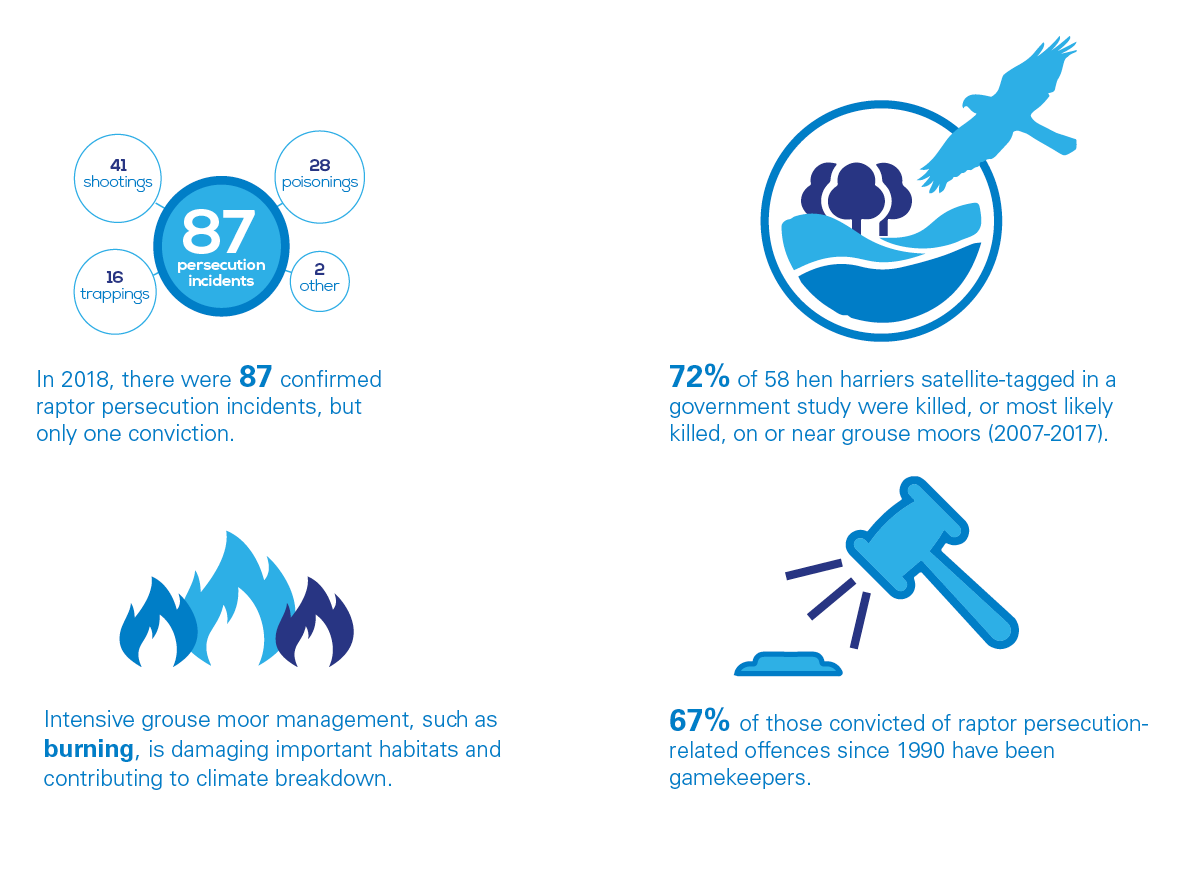 Of the 87 confirmed persecution incidents recorded in 2018, there were:

Birds on the brink

One bird that is particularly badly affected by illegal persecution is the hen harrier. Studies suggest that there should be around 300 pairs in England, but in 2018 there were only nine successful nests, none of which were on private grouse moors. These beautiful moorland birds are now barely clinging on as a breeding species in England, largely as a result of illegal killing. In Scotland, a recent study found that hen harriers were missing from large areas of suitable habitat on grouse moors.

In 2018, the RSPB fitted satellite tags to over 30 hen harrier chicks in the UK as part of the EU Hen Harrier LIFE Project, to allow us to monitor their movements once they left their nests. Within a year, 11 of these birds had been killed or had disappeared in suspicious circumstances, including Arthur, who was last recorded close to several driven grouse moors in the North York Moors National Park.

Despite widespread searches, no trace of his tag or body has ever been found, and the RSPB believe that Arthur, and many other "missing" birds, were most likely illegally killed.

Satellite tagging technology alerted scientists to the sudden, unexpected disappearance of two golden eagles, on the same morning in April 2019, from the same grouse moor in Scotland. This is also being treated as highly suspicious. A Scottish government review found that, between 2004 and 2016, a third of tagged golden eagles have disappeared in suspicious circumstances, and are thought to have been illegally killed.

Persecution blackspots: bird crime near you

The RSPB’s raptor persecution map hub shows persecution blackspots between 2012 and 2018 and allows you to search for incidents by year, area or type. Data shows that these blackspots are primarily found on and around land managed for driven grouse shooting, including:

North Yorkshire
In 2018, as in the past five years, the highest number of confirmed incidents occurred in North Yorkshire (15). With two national parks and plenty of suitable habitat, North Yorkshire should be a stronghold for hen harriers, yet these birds rarely nest here with success. North Yorkshire is home to a large number of driven grouse moors.

The “Dark Peak”
The northern Peak District, known as the “Dark Peak”, is another problem area. In May 2018, a scientific article published in the journal British Birds, cemented the link between raptor persecution and land managed for driven grouse shooting in the Peak District National Park. A tawny owl and short-eared owl were both found shot here in 2018, but no-one has been held to account for these crimes.

South Lanarkshire
The moors around the village of Leadhills in South Lanarkshire have an appalling reputation for raptor persecution, with over 70 offences documented here in the last 20 years. In 2018 a buzzard was found to have been shot on two separate occasions. Most recently, in May 2019, a male hen harrier was caught in the jaws of an illegally set trap, and a second such trap was found on the bird’s nest nearby. Sadly, the harrier, whose leg was badly broken, had to be euthanised, despite valiant efforts to save it.

Chris Packham reports on this story in the video below, which contains upsetting images.

Chris Packham reports on a Hen Harrier that had been caught in a trap and had its leg broken. A nearby nest was found that contained a set spring trap hidden under moss next to a couple of Hen Harrier eggs, there was no sign of the female.

Raptor persecution is part of a wider problem with upland management. The UK is facing a climate and ecological emergency, and urgent reform is needed if the government is to meet its own targets in this area. Moorland habitats should support a variety of wildlife. As a result of intensive management with the sole aim of producing vast numbers of red grouse to be shot, huge areas of our uplands now lack biodiversity and feature primarily species that are not seen as a threat to red grouse.

In areas of the eastern Scottish Highlands, the mountain hare population has plummeted by 99% since the 1950s due to unregulated culling, again due to a perceived threat to grouse stocks.

Creating a landscape to purely benefit red grouse has also led to the removal of scrub and woodland, with the burning of protected carbon-rich peatland habitats releasing CO2 into the air, thereby contributing to climate breakdown. Peatland which locks away carbon must be protected not destroyed – our bogs need water not fire.

What needs to be done?

Urgent change is needed to help tackle the climate crisis, restore biodiversity and end criminality in our uplands.

The RSPB is calling for the following:

What is the RSPB doing?

The RSPB’s Investigations Team is dedicated to preventing, detecting and exposing crimes against birds of prey through fieldwork, intelligence and advocacy. We provide expert advice to support police investigations and maintain the only reliable centralised records of UK raptor persecution incidents.

In February 2018, the Investigations Team assisted with Operation Owl, an initiative by North Yorkshire Police. Working in partnership with the two national parks authorities and the RSPCA, we engaged with local communities to highlight the illegal killing of birds of prey. We are also members of the PAW Scotland Raptor Group and on the steering group of its “Heads-up for Harriers” project.

Raptor persecution is one of the UK government’s Wildlife Crime Priorities, and the RSPB supports this as part of the Raptor Persecution Priority Delivery Group for England and Wales. In 2018, this was taken over by a new chair, Superintendent Nick Lyall, who has been proactive in addressing the issue. He is preparing a national rollout for Operation Owl in 2019.

What can you do to help?

You, the public, have a huge role to play in the fight to protect birds of prey.

If you see suspicious activity, find evidence of illegal traps or find a dead or injured bird of prey, please:

Join the conversation on Twitter (follow @RSPBbirders and @RSPB_Skydancer) or at Hen Harrier Day events. We believe that public pressure on the government is crucial in turning the tide for birds of prey and ending the culture of criminality in our uplands.

Become a Bird of Prey Defender

You can help the RSPB’s Investigations Team fight for the future of birds like hen harriers by becoming a Bird of Prey Defender for just £3 a month, or through a one-off donation.

For detailed information about bird of prey persecution incidents in 2018, please download the Birdcrime 2018 Appendices. If you would like to find out more about studies into raptor persecution, links are provided within the document.