A closer look at the decline and recovery of the stone-curlew population.

The UK stone-curlew population declined by more than 85 per cent between 1940 and 1985, to a low of around 160 pairs. However, its fortunes were turned around, and the bird is now in recovery. In 2013, the cold weather resulted in the death of up to 20 per cent of the UK stone-curlew population, however the population has since recovered in some areas and remained stable in others. In 2016, there were between 320 and 380 breeding pairs.

Number of breeding pairs of stone-curlews per year 1990–2016 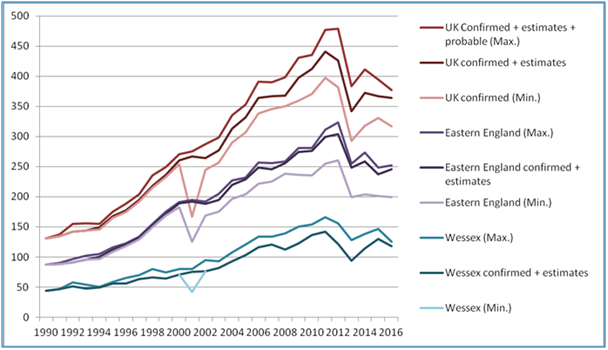 The core stone-curlew areas are centred around the Brecks on the Norfolk-Suffolk border, and around the Salisbury Plain in Wiltshire.

They also nest at lower densities within one mile (1.6 km) of developed areas and major roads, so site protection is important for their survival.

By the mid 1980s, the stone-curlew population had reached a low of around 150 pairs. Stone-curlews were on the brink of extinction in many areas. The main drivers for the decline had been the loss of their semi-natural habitat and the increasing mechanisation of farming, which meant that their camouflaged nests were inadvertently being destroyed.

Stone-curlews disappeared from the northern part of their range in Yorkshire and Lincolnshire in the first half of the 20th century, and from Dorset at the turn of the 21st century. The species now only nests occasionally in Sussex and Cambridgeshire.

The stone-curlew population in western Europe began to decline in the latter 19th century, and sped up after the Second World War, coinciding with the acceleration in the loss of lowland dry grassland and heath.

Numbers have been falling across Europe since the 1970s, including the large populations of Spain, Portugal and France. The Dutch population vanished altogether in the 1990s and the Polish population is threatened.

Effective nest protection and marking schemes successfully reduced mortality on arable land and the population began to recover, and in the bird’s core breeding areas of Wessex and East Anglia, the population decline has been halted and numbers are now increasing.

Research suggests that without this intervention, the population would decline each year by three to four per cent. However if enough birds nest on safe habitats, the population could remain stable without interventions. The Suffolk Coast population has recovered from one pair to 15 pairs in slightly more than 20 years, helped by semi-natural habitat creation, particularly at RSPB Minsmere reserve.

Our long-term vision is for at least 400 pairs to be nesting on safe habitats in the UK.

Stone-curlews nest on open, bare ground or in areas with vegetation height below 2cm.

Become an RSPB member by signing up here.

Stone-curlew populations are bouncing back after suffering massive declines since the 1930s.