Since 2007, more than 360 projects have been proposed for the area which will cause direct loss of almost all areas where red-breasted geese feed during winter.

Bulgaria became a member of the European Union in January 2007 bringing the country under the same environmental legislation that applies to other Member States.

This includes obligations under the Birds Directive to designate areas of European significance for birds as Special Protection Areas (SPAs) and then to protect them.

However, Bulgaria failed to fully designate its Important Bird Areas (IBAs) as SPAs and permitted uncontrolled developments on many of them. One of the most important is Kaliakra on the Black Sea coast. This site and the region hosts most of the global wintering population of endangered red-breasted goose and in spring and autumn is a stop-over site for tens of thousands of migratory birds.

The situation at Kaliakra was bleak

Hundreds of wind turbines were given permission to be build within the SPA and the area of the IBA excluded from the site. Some of the land was converted for orchards and in neighbouring Belite Skali SPA, a golf course and hotel development obliterated most of the habitats used by breeding and migrating birds.

Further north, consented wind energy projects threaten even more wintering geese feeding areas. These built and consented projects also threaten the tens of thousands of birds which fly through the area every year.

These cases have been the subject of sustained work from the Bulgarian Society for the Protection of Birds (BSPB), supported by RSPB for over ten years. Our actions have now lead to the full designation of all but one of the IBAs previously not designated as SPA, including at Kaliakra.

Sustained pressure has forced the government to bring in new laws to limit the validity of consents to five years if they are not built. All new wind energy development in and around SPAs has been banned, and further wind energy development is now guided by a national plan, following a Strategic Environmental Assessment and sensitivity mapping process.

In January 2016 the judgement of the European Court of Justice condemned Bulgaria for failing to fully designate and protect Kaliakra and neighbouring sites. BSPB supported by RSPB will now work to ensure that the Bulgarian Government makes good the damage to these sites, while continuing to improve its regulation of development that might affect Natura 2000 sites more generally.

Kaliakra is on the Black Sea coast and is on the route of the 'Via Pontica', one of the two most important migratory flyways in Europe.

Kaliakra contains one of the last remnants of the unique steppe habitats in the European Union and some of the largest coastal cliffs.

Thousands of birds travelling from Europe to Africa and the Middle East – including white storks and pallid harriers – stop at Kaliakra to roost or look for food, particularly when westerly winds are strong. The majority of the world population of the globally threatened red-breasted goose overwinters in the area and feeds on agricultural fields at the site, along with large populations of white-fronted geese. Some of the area was designated as an SPA, but other parts of the site that should qualify were excluded until being fully designated by the Bulgarian government after sustained pressure.

The open steppe habitat is home to breeding populations of stone-curlews, calandra and short-toed larks (the best place for them in Bulgaria) as well as rose-coloured starlings and four species of wheatears including almost all of the Bulgarian population of pied wheatears. Long-legged buzzards, Levant sparrowhawks and eagle owls also nest in the open areas.

The sea cliffs are home to the only nesting shags in Bulgaria and the marine areas of Kaliakra host the biggest flocks of yelkouan shearwaters in the country's coastal waters. 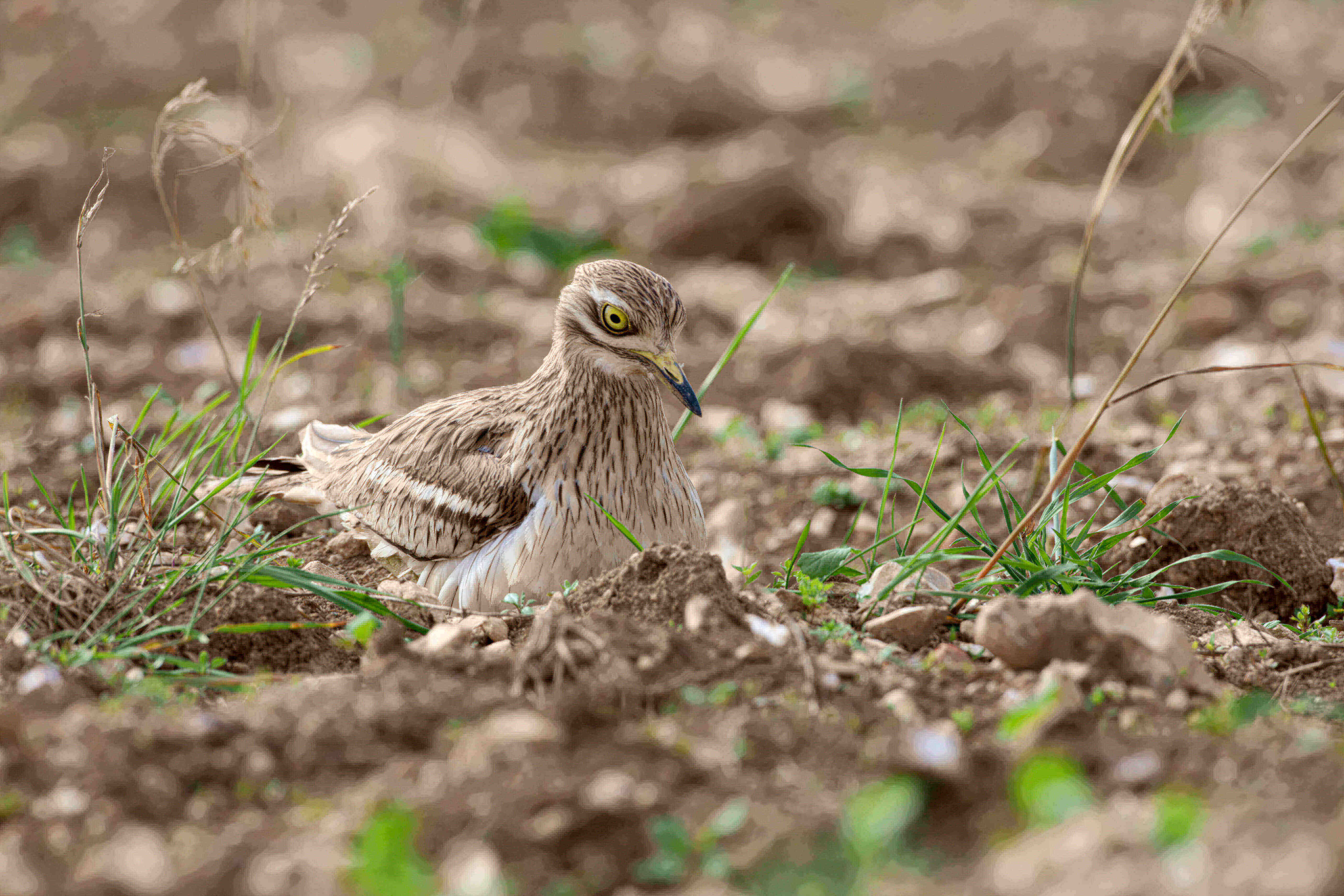 Kaliakra is of exceptional importance during migration and it is a typical bottleneck site funnelling migrant birds towards a critical sea crossing. It is located on the Via Pontica, the second biggest migration flyway in Europe. Every autumn considerable numbers of soaring birds pass through Kaliakra – up to 199,000 storks, pelicans and cranes and more than 10,000 birds of prey, including globally threatened species such as pallid harriers, saker falcons and Imperial eagles.

The whole territory of the Kaliakra SPA between Kavarna and Tyulenovo is used as a stopover site for migrating storks. Flocks of smaller birds as well as quail and the globally threatened corncrake stop here to roost and feed before continuing their migration. They migrate mainly during the night. During the autumn migration, more than 50,000 birds have been recorded during daylight hours of a single day, and the total number of birds migrating is likely to be more as most of the birds migrate at night.

Kaliakra should be properly protected – including by proper application of the appropriate assessment requirements of the Habitats Directive during project planning.

The site has now been fully designated by the government due to pressure from the European Court Case.

We do not believe that further windfarms should be authorised in this highly sensitive site and in the surrounding region. We are pleased that the Bulgarian Government has now adopted a strategic plan for wind in Bulgaria, informed by Strategic Environmental Assessment (SEA) and sensitivity map. Any further wind energy development in Bulgaria needs to be sited in conformity with this plan, and rigorously assessed.

We strongly support renewable energy provision, including windfarms, but these must be planned and developed in accordance with European legislation – the choice of location is key.

We are delighted with the judgement of the European Court of Justice in January 2016 that in failing to fully designate and protect this and neighbouring sites, Bulgaria is in breach of the Birds and Habitats Directives. We will now expect the European Commission to work with the Bulgarian Government to ensure that any damage to the sites is removed, or compensated for.

We continue to support BSPB in their work to bring the issue of windfarms on the Black Sea coast to the attention of the Bern Convention. In 2007 the Bern Convention adopted a strong recommendation that Bulgaria reconsider windfarm development in these sensitive locations, improve the quality of environmental assessments carried out to inform planning decisions on particular projects, and introduce a strategic approach to windfarm planning informed by Strategic Environmental Assessment. Some of this has now been achieved, but more is needed.

BSPB also provided the European Commission with information on breaches of the Habitats Directive in over a dozen other sites across Bulgaria, where inappropriate development has been given consent that will damage their unique habitats. This has led to an additional formal warning being issued by the EC against Bulgaria.

All these complaints were produced with support from us. As well as bringing the case to the attention of the Commission and meeting with Commission officials, we worked to raise the profile of the case with MEPs - in summer 2008, more than 100 of our supporters wrote to their MEPs about Kaliakra, and again in December 2009.

We also support BSPB's national actions in this and associated cases (like Smin windfarm which impacts on feeding areas of red-breasted geese to the north of Kaliakra). This includes meeting ministers, officials and developers, participating in planning processes, taking national court cases and raising awareness in national media.

We are very pleased that in May 2011 the Bulgarian Government confirmed extensions to four of the six SPAs that we have been campaigning on. The full designation of Kaliakra now means that the only IBA in Bulgaria that still remains substantially unprotected is the Rila Mountains IBA. We will continue to press for the speedy full designation of this site.

This statement sets out the position of BSPB based on the project information disclosed in relation to the application by AES Geo Energy (AGE) for IFC and EBRD funding to support the project and updates the comments provided by BSPB in the preliminary position dated 17 July 2008. PDF, 336Kb

The Danube Delta is well known as one of Europe's premier wetlands.

Construction of an airport & the development of tourism in St Helena may have a profound effect on the environment.