Have an old or unwanted pair of binoculars, telescope, spotting scope or tripod that are in good working order, collecting dust in the cupboard? If so, we can put them to use in a conservation or educational project somewhere.

Where to send your items

Do you have an old or unwanted pair of binoculars, telescope, spotting scope or tripod which are in good working order, collecting dust in the cupboard? If so, we can put them to use in a conservation or educational project somewhere in the world.

Please send your items to the address below:

Please note - we can only use items in good working order.

Alternatively, you can take your donation to your nearest staffed RSPB nature reserve or regional office/country headquarters, or send it in via your RSPB local group, where your donation will be forwarded to us.

If you have any queries about the scheme, please email us.

How the scheme works

When we receive donated binoculars, telescopes, spotting scopes and tripods, staff and volunteers check the condition of the items. Useable optics are then stored in the RSPB Business Centre until needed.

BirdLife International Partners and other organisations within these countries that have heard about our scheme send us many requests for equipment.

We do everything we can to fulfil each request. To keep costs to a minimum we often rely on someone visiting the country from which the request has come to deliver the optics.

We also keep a record of where we send the equipment and ask that the society/project agrees to help to stimulate interest in conservation, and not to sell the equipment for profit.

What has been achieved

Since it began in 1985, the RSPB's second-hand binocular scheme has provided more than 12,000 pieces of optical equipment to conservation and education projects in more than 90 countries.

From Vietnam to Greece, India to Ecuador, binoculars and telescopes have found their way to projects in some of the world’s most remote communities, often delivered by RSPB staff and supporters.

We have been able to provide equipment for a range of initiatives across the world that have helped educate people and protect many different species. 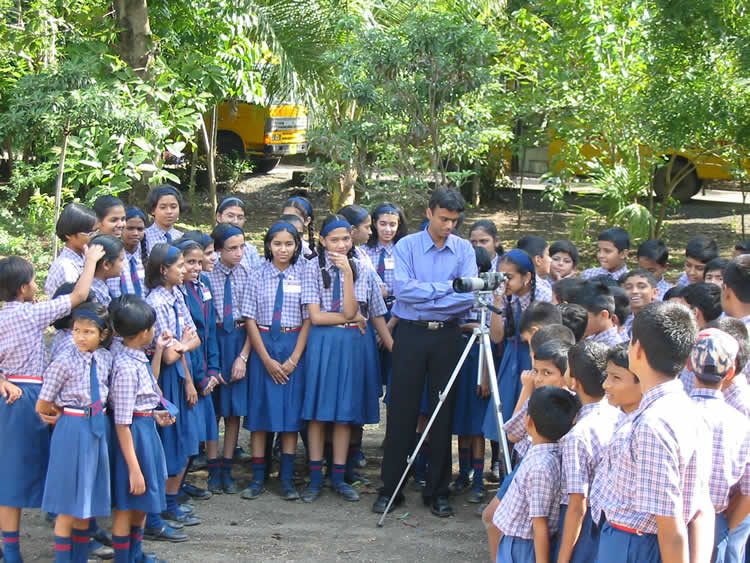 Without it, the projects would have been much more difficult to run, as many of the organisations could not have afforded to buy binoculars and telescopes.

As they upgrade their equipment, lots of people put their old binoculars and telescopes in the back of cupboards and forget about them. This is a really good way of putting them to a good use.

The initiative has helped a range of projects, including equipping Angola’s first-ever bird hide, the chance for Tanzanian school children to see close-up views of wildlife at a national park and for park rangers on a Brazilian rainforest reserve to protect wildlife from illegal hunters.

Helping projects around the world

The second-hand binocular scheme is helping hundreds of projects across the world. Here are just a few examples of projects that are benefiting from this scheme:

‘The students were thrilled with the experience of seeing the birds so close up. This is a very good scheme and I am trying to make it popular in India so that people here also start donating their optics. 'The donated scope has helped us to study bird’s behaviour without disturbing them. Many schools have approached me to take their students for birdwatching trips. This has started an all new chapter in functional conservation in Nashik city and all the credits go to the RSPB for helping me.’

'The community is conserving and managing an area of locally-owned forest, rich with bird life, to encourage ecotourism and sustainable resource use which will be of benefit to themselves and the natural environment. 'Thanks to the RSPB second-hand binocular scheme, we were able to provide an essential piece of kit with which to start training local people as bird guides'

Esther Bertram from the Rwenzori Development Foundation in Western Uganda

'Birdwatching is taking its very first steps in Russia. Interest in this pastime is growing day by day and RBCU are working hard to ensure this interest continues to grow. 'This includes taking local children out to watch birds and learn more about their surrounding environment using binoculars donated by the scheme. This is a vital piece of work that will help to build environmental awareness for the future'.

'We are working with BirdLife Brazil to monitor birds in the Atlantic rainforest. To date, 403 bird species have been confirmed in the reserve, including seven categorised by BirdLife International as threatened. 'Much of the area has been damaged by poor land management, and we intend to start planting trees, demonstrating to landowners that habitat creation for birds and wildlife is possible.'

'Birdwatching is now beginning to take off as a hobby in Turkey and although the new birdwatchers are full of enthusiasm, many lack resources. The donation of second-hand binoculars and telescopes makes a very real difference to their enjoyment and hopefully leads on to a life-long commitment to studying and conserving the wonderful bird life of their country.'

Support us when you shop

You can raise money for us when you shop. Find out how your shopping can help wildlife.

We've got big plans. From now until 2030 we'll be focusing on some ambitious goals. Find out more here.

Gift Aid means that for every £1 you give us, the RSPB can get a further 25p from HM Revenue & Customs.