Forth and Tay Wind Farms

In the last decade, there has been a huge expansion of offshore wind development. In the Forth and Tay area, there are four commercial scale wind farms with consent plus two in the pipeline and a further three sites identified for development in the Sectoral Marine Plan for Offshore Wind.

We need to move to low carbon energy rapidly to tackle climate change – itself a major threat to wildlife. RSPB Scotland however strongly believe we must achieve this transition in harmony with nature. This means putting renewable technology in the right places, rigorously assessing potential impacts and monitoring the ongoing impacts of consented development so we can learn for the future.

We are continuing to work with developers in the Forth and Tay region to ensure development is appropriately sited, designed and monitored to avoid significant harm.

The Forth and Tay area is home to a fantastic abundance of wildlife. The area includes the world’s largest northern gannet colony at Bass Rock; kittiwake colonies at Fowlsheugh to the north and St Abbs to the south; and gannet, kittiwake, puffin, guillemot and razorbill colonies on the Isle of May and other Forth Islands. These populations make this region one of the best places in the UK for seabirds and it is duly protected by a wealth of nature conservation designations including national Sites of Special Scientific Interest (SSSI) and international Special Protection Areas (SPA) under the European Birds Directive.

In December 2020, the importance of the area for birds was further recognised when the area of sea along the Forth and Tay coastline was designated as a marine SPA. This new SPA, the Outer Firth of Forth and St Andrews Bay Complex, reaches from Arbroath in the North to St Abb's Head in the South and encompasses the Firth of Forth, the outer Firth of Tay and St Andrews Bay. It is considered one of the largest and most diverse marine bird concentrations in Scotland, providing feeding ground for thousands of gannets, kittiwake and puffin and an important refuge for migratory birds.

Offshore wind poses a significant risk to seabirds. Directly there is a risk of mortality through collision. Indirectly, there are risks associated with displacement from foraging areas and changes to the prey species distribution. Extra energy costs from having to travel further either to avoid windfarms or find prey, the additional time spent flying and a change in food can have knock-on effects for body mass and adult survival as well as nest attendance and chick feeding. These pressures are additional to those which a number of seabird species are already facing from climate change, predation by invasive species, pollution and other marine activities. Some, such as kittiwake, are already experiencing long-term population declines and the additional pressure of offshore wind farms could further exacerbate these declines and wholly undermine any attempts now and in the future to restore their populations.

We know how important renewable energy is for Scotland, the UK as a whole and the future of our planet. Action to combat climate change is vital for both people and nature and we will continue to support it. We will also however continue to fight for wildlife as it faces increasing and more complex pressures. Renewable energy provision and protecting nature can, and must, go hand in hand in a sustainable society.

The table below shows the consented, pipeline and pre-pipeline commercial scale wind farm projects in the Forth and Tay area. We are currently working on the Berwick Bank and Marr Bank applications, talking with the developer prior to them submitting applications and providing comments on the pre-application submissions relating to environmental impact (EIA) and habitats (HRA) assessments. 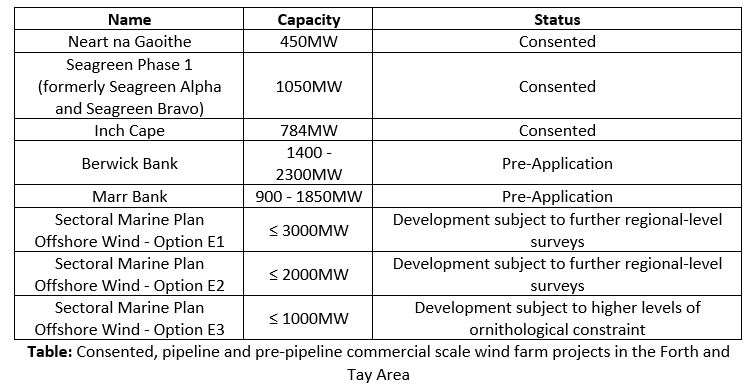 We are particularly concerned about the cumulative impact of offshore wind development. Each project places individual pressures on the environment and across multiple developments these pressures add up. It was for this reason that in 2015 we brought a legal challenge against the decision to consent the four Forth and Tay windfarms (Neart na Gaoithe, Inch Cape, Seagreen Alpha and Seagreen Bravo). The assessments estimated over a thousand gannets and hundreds of kittiwakes could be killed each year during the summer months alone and many hundreds of puffins could die as a result of losing important feeding areas. Though initially we were successful in our challenge, the ruling in our favour was later overturned following an appeal by the Sottish Ministers and all four developments were allowed to go ahead.

Although we were disappointed in this conclusion, we continue to work constructively with the developers and the Scottish Government to try to ensure that the major impacts of the consented projects on seabirds are mitigated as much as possible.

A lack of data and gaps in our understanding, especially of the long term impacts of offshore wind on seabirds remains a concern. We are pleased to be involved in the monitoring of the consented developments through the Forth and Tay Regional Advisory Group (FTRAG). This group was established as a condition of the four consented projects. It seeks to ensure that appropriate and effective monitoring is undertaken, aims to encourage collaboration in monitoring and provides advice to the Scottish Ministers on research, monitoring and the effectiveness of mitigation measures. We hope that the creation of such groups and discussing concerns will result in a better understand of and better outcomes for our natural environment.

We also we welcomed the recognition in the 2020 Sectoral Marine Plan that Scotland’s breeding seabird colonies are approaching environmental limits. All three sites allocated for further offshore wind development around the Forth and Tay area are subject to ornithological constraint. Two require completion of further regional-level surveys before development can proceed while in the third allocated site, development should not proceed until enough evidence on the environmental capacity for seabirds exists to reduce the risk to an acceptable level.

Filey Bay has given life to generations of seabirds, but in recent years it has also claimed many victims.