Help save our house martins

House martins are remarkable summer migrants delighting many with their return each year to nest and raise a family. In this guest blog from House Martin Conservation UK & Ireland we take a look at these fascinating birds and the simple things we can all do to help them.

Spring heralds the arrival of the charismatic house martin, returning from its wintering grounds in Africa, to its northern breeding grounds, which includes the UK and Ireland.

At House Martin Conservation UK & Ireland, a newly formed charity run by enthusiastic volunteers, we look forward to an exciting spring and summer as house martins flit across our skies.

These beautiful birds with their fluffy white legs, white underparts and rump, black forked tail and upperparts, and a shimmering glossy blue on their head and back, have the power to charm. 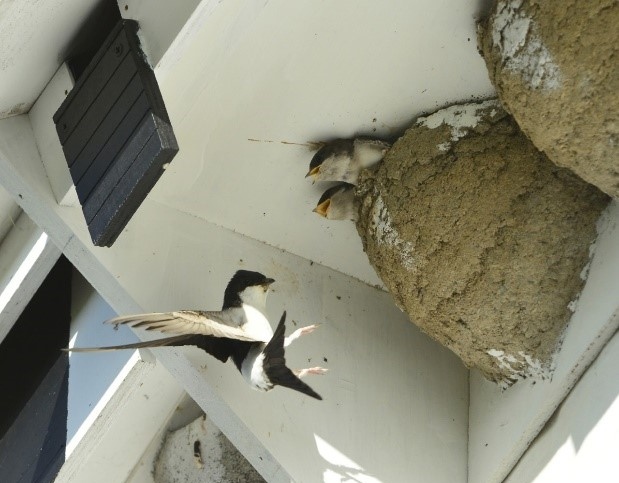 House martins usually breed in colonies, building their nests out of mud pellets which they collect in their beaks. Around 1,000 mud pellets mixed with grass are used to build a nest which can take two weeks to complete, and once constructed house martins will continue to make mud repairs to the nest year after year.

When and where to look for house martins

In the UK, most nests are built under the eaves of buildings, however there are still some colonies that nest on cliffs; their natural nesting site before our civilisation constructed buildings.

Being social birds, their “pritt pritt” calls, and vocal chit-chattery, are a pleasing sound to the ear, and invoke our senses to warm sunny days in spring and summer.

House martins stay with us in the UK from April until September, and even into October in a good year, usually raising two broods of four to five eggs, but sometimes three if the season goes well. Young from the first brood have been observed helping to raise the second brood, which is unusual, and shows how socially minded these birds really are.

Their diet is insects, collected on the wing, typically at higher altitudes than other hirundines such as swallows, and other martin species, which is believed to be why their legs are covered in tiny feathers; to protect them from the cooler air.

You may have fond memories of thriving house martin colonies in local communities from decades past, and you might be lucky enough, present day, to have them nesting on your house, or nearby. Watching the birds build their nests, listening to the chattering calls of adults and young, and marvelling at their agile flight in their pursuit of insects are all delights of sharing life with house martins.

Having declined in the UK by 57% between 1969 and 2018, the once thriving house martin colonies have dwindled, and are completely lost in many locations. The bulk of declines have been found in England over the last 10-15 years; populations in Scotland and Northern Ireland appear to be faring better over the same period. It is due to this decline that in 2021 the house martin was reclassified as Red listed in the Birds of Conservation Concern report, putting it in the top division of birds we should be concerned about.

Why are house martins in decline? 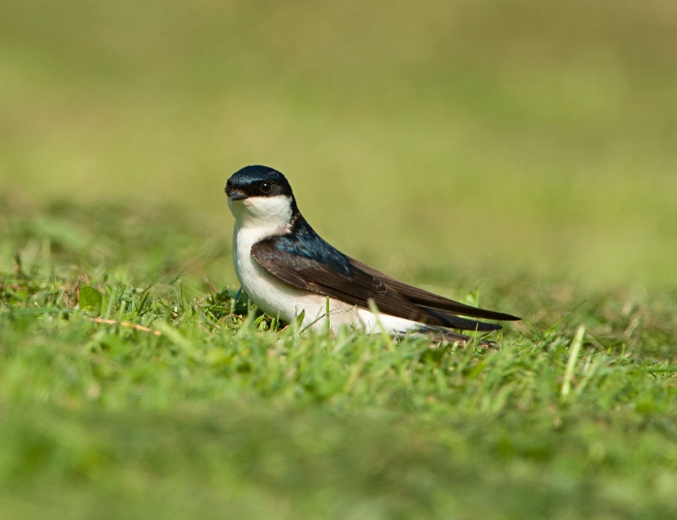 There could be several reasons contributing to their decline:

How can I help?

There are several ways in which we can play our part to aid these wonderful birds: 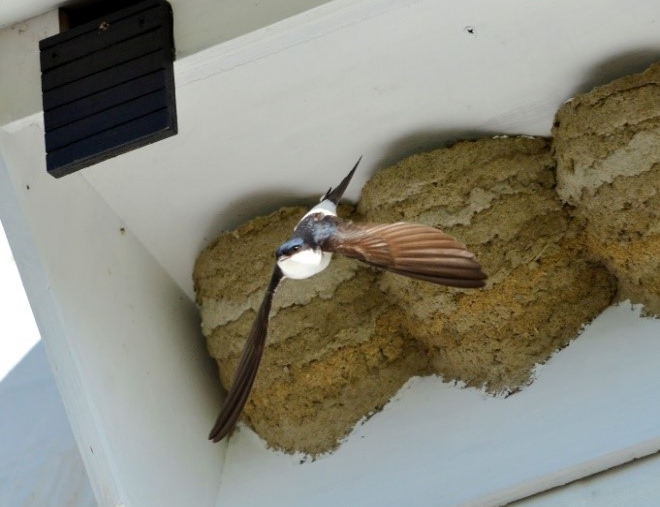 Our group is ambitious through a genuine passion for house martins, and whilst there is much to do to aid and conserve them, in our first year we have: set up our website and media groups, are working with the RSPB on a new artificial nest cup, have produced and distributed thousands of awareness leaflets, and have been sharing information internationally with conservation groups in Italy and the Netherlands.

We know that so much more can be achieved with the help of like-minded bird lovers.

House Martin Conservation UK & Ireland are optimistic that together, we can make a real difference.

For more information about house martins, how you can help, and to access our resources, please see our website, and for further engagement, join our social groups.

Give house martins a perfect home this spring, with one of our specially-designed nest boxes.