A food chain shows you on paper who eats what in an ecosystem. But in real life it’s not so simple. Every ecosystem contains thousands of different food chains, all linked together.

Seems simple enough doesn’t it? But look closer. At each link in the chain, it intersects with other chains. For instance:

It’s not only this caterpillar that eats the leaf. So do many other types of insect. Many also eat other plants.

The blue tit eats the caterpillar. But so do other birds, such as great tits, as well as other animals such as shrews and spiders. Each of these also eats other insects too.

The blue tit also eats many other insects, as well as spiders, seeds and berries. Otherwise it would starve whenever caterpillars ran out.

It’s not only the sparrowhawk that eats the blue tit. So do other predators, including weasels, owls (at night) and even great spotted woodpeckers, which sometimes take chicks.

And the sparrowhawk doesn’t only eat blue tits. It also eats other birds, such as chaffinches, blackbirds and even woodpigeons.

See? The more you think about it, the more complicated it gets!

Caught in a web

Each member of one food chain is part of many other food chains at the same time. This forms a complicated web of connections called a food web.

A simple oak woodland food web looks like this: 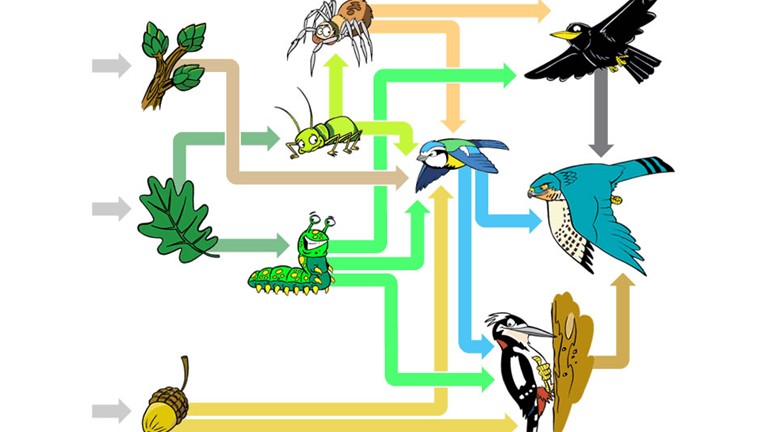 As you pass along a food chain, the number of individual animals decreases at each trophic level.