In the British Isles, hen harriers nest and roost in heather on open, upland moors. They feed on small mammals and birds such as meadow pipits, voles and occasionally young grouse. Many upland areas are managed for grouse shooting. This leads to conflict through the illegal and legal control of grouse predators, including hen harriers.

Scientific evidence shows that the illegal killing, associated with the management of moorlands to intensively rear large numbers of grouse for driven grouse shooting, is the main factor limiting the recovery of hen harriers in the UK.

Most driven grouse shooting occurs in northern England and southern and eastern Scotland. This project focused on seven Special Protection Areas (SPAs) within this region: Bowland Fells, North Pennine Moors, Glen App and Galloway Moors, Muirkirk and North Lowther Uplands, Langholm-Newcastleton Hills, Forest of Clunie and Glen Tanar. These sites were all designated during the creation of the Natura 2000 network, to be managed in such a way as suitable for hen harriers. Estimates suggest there is the potential for a population of around 2,650 pairs across the British Isles. 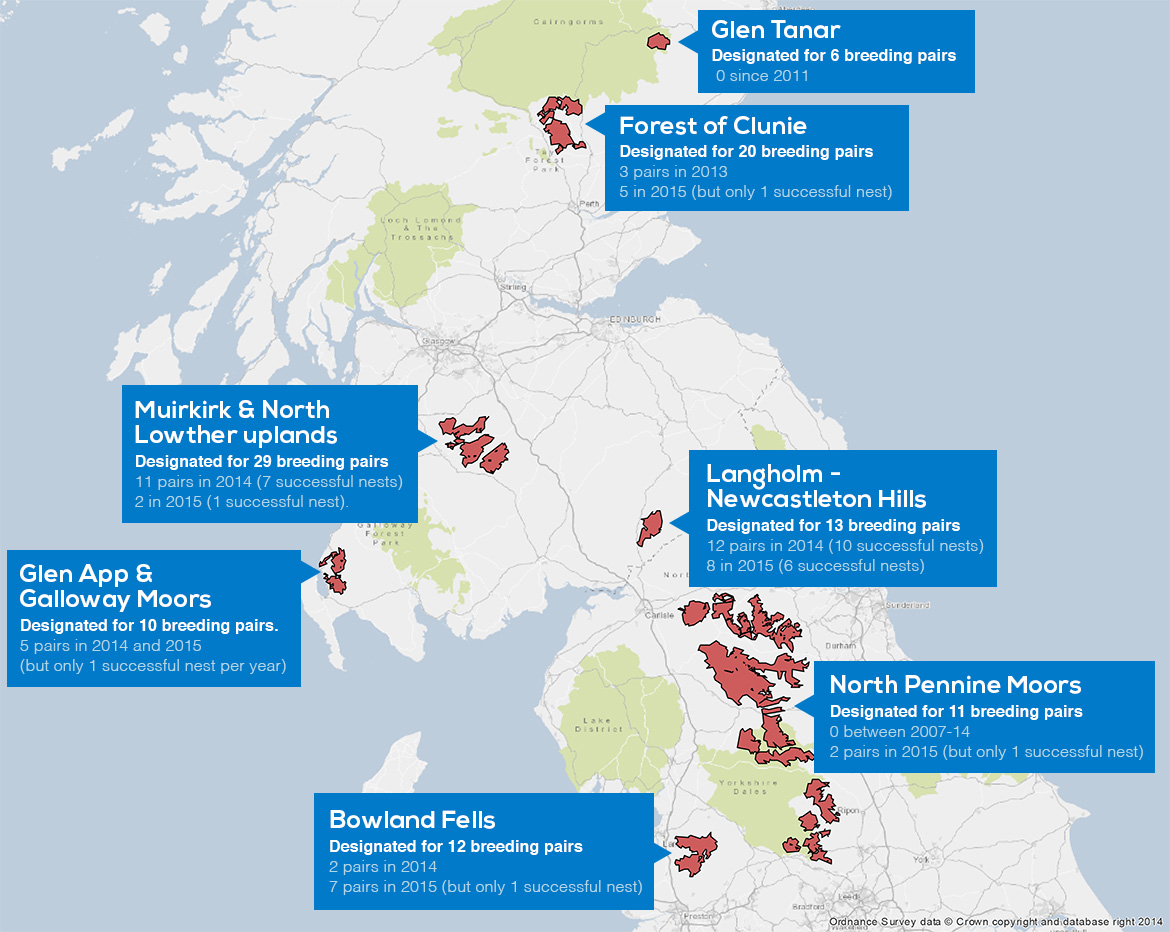 At the start of the Natura 2000 network, 98 pairs of hen harriers were found across all seven sites. By 2016, the total number of birds found in these SPAs declined to just 14 pairs. This is part of the national decline across the UK, leaving populations heading towards local extinction.

To address these issues, this project aimed to:

Along with our partners we monitored a number of hen harrier nests each year, and days before the chicks fledged from their nests, some of them were fitted with tags so we could follow their movements. We employed highly experienced taggers, operating under an annual project licence issued by the British Trust for Ornithology. We helped in the development and sharing of best practice for the tagging of this species.

The tracking data was recorded on a daily basis to allow us to see the birds’ movements, habitat use, roost sites and nest locations. It revealed the extensive journeys taken by some of the birds across the UK and continental Europe and showed us the circumstances in which they were dying.

These findings have significantly added to our knowledge and understanding of hen harriers and allowed us to enhance protection of the species.

We worked with local raptor workers from the Northern England Raptor Forum and Scottish Raptor Study Group to share knowledge of both new and historical sites found through field observations.

The public were encouraged to report sightings of hen harriers to the Hen Harrier Hotline, which were followed up by members of the project team. Data from the tags enabled us to see where and when tagged birds were settling, allowing us to locate additional sites.

These activities enabled us to focus our protection efforts on birds in the most vulnerable locations, working alongside raptor workers to provide 24 hour protection where required. We found that monitoring of hen harriers can be an important deterrent to those who wish to harm the birds, their eggs or destroy their nest or roost sites. Protecting young birds at the nest gives them the best chance of fledging success.

We gathered data on incidences of bird crime and encouraged the public to report any suspected incidents. We monitored nesting success and recorded reasons for failures. We observed the tagged birds and conducted ground searches to recover as many dead birds as possible. Where birds died naturally, we were usually able to locate their remains and send them for post mortem examination by a veterinarian to investigate cause of death.

Where birds were suspected to have been illegally killed, we liaised closely with the police and National Wildlife Crime Unit passing on all the necessary information for follow-up investigation. Subsequent publicity was routinely discussed and only issued with their permission.

Each year we published a Birdcrime report to catalogue the number and type of persecution incidents detected.

We delivered workshops and assemblies in primary and secondary schools in the seven SPAs in England and Scotland, and shared an education resource pack with teachers. We visited local community groups to give talks in these areas such as Women’s Institutes, U3A, Rotary Clubs and local nature groups. With each group we discussed the importance of the upland landscape, the ecology of the hen harrier and the problems they face.

We facilitated discussion sessions with gamekeeping, animal and countryside management students at land-based colleges across the UK, encouraging them to think critically about human-wildlife conflict and sustainable land management.

We issued press releases highlighting interesting stories, to keep hen harriers in the public consciousness. Project team members were interviewed for news bulletins, wildlife and countryside programmes to raise awareness of the prevalence of bird crimes and shared good news stories when our birds travelled to unexpected locations or had good breeding success.

We regularly updated our project website with tracking maps to show where tagged hen harriers were travelling, allowing the public to follow their journeys. We used the RSPB Skydancer blog and Twitter to promote and share stories online. We installed interpretation panels on reserves and spoke about the project at national events including Hen Harrier Day and Bird Fair.

Maintain habitat that is suitable for hen harriers

As well as managing our reserves, we worked with landowners including United Utilities, the National Trust Scotland and smaller private landowners and agents to manage and conserve habitat that would be suitable for hen harriers. We provided guidance and assistance in land management practices, sharing best practice for maintaining high quality habitat.

Throughout the project, we developed positive relationships, and where hen harriers nested we were able to fit tags to the young birds. This allowed us to track nearly five times as many hen harriers as was originally envisaged. Supportive partnerships also meant more people on the hills protecting hen harriers.

If we can stop the illegal activity that is currently causing the decline of hen harriers and other birds of prey, populations can recover. We’ve already seen this with red kites and golden eagles.

We must manage our uplands legally and sustainably to address the current biodiversity and climate emergencies.

What we’ve learned from the project: