Minsmere: the nature saver, the memory maker. This is a land where marsh harriers glide and bitterns boom. A place where more than 6,000 different species have chosen to call home. That isn’t a typo – we did say more than 6,000 - making it one of the most important places for nature in Europe.

This vast reserve where nature abounds turns 75 this year and we think this is a pretty good reason to celebrate.

A land shaped by war becomes a haven for life

In June 1940 the beginnings of the Minsmere we love today began to take shape. The east coast of England was a likely invasion point for the Germans during the Second World War and so efforts were made to make possible landing spots as inhospitable as possible. If you visit today you can still see the line of concrete blocks which made up part of the defences, along with huge wooden and metal spikes which once stood ominously on the shingle foreshore.

But it was another part of the plan which would prove to be a lasting legacy. Minsmere Levels were reflooded, creating a natural barrier stretching 400 acres. It is here, in this expansive stretch of pools, lagoons and swamps, which first saw the return of a species not seen in the UK for more than 100 years…

The return of the zebras*

We know the exact date humans realised that avocets returned to the UK. On April 8 1947, these black and white birds with blue legs returned to our shores for the first time in more than a century. For their home, they chose a muddy corner of Minsmere. Cue elation, panic, the odd swear word, more elation and then a dogged determination by a small group of volunteers to make sure they stayed.

Led by the landowner, Capt Stuart Ogilvie, this band of brothers carried out almost constant surveillance of the nest site to protect it from egg collectors. 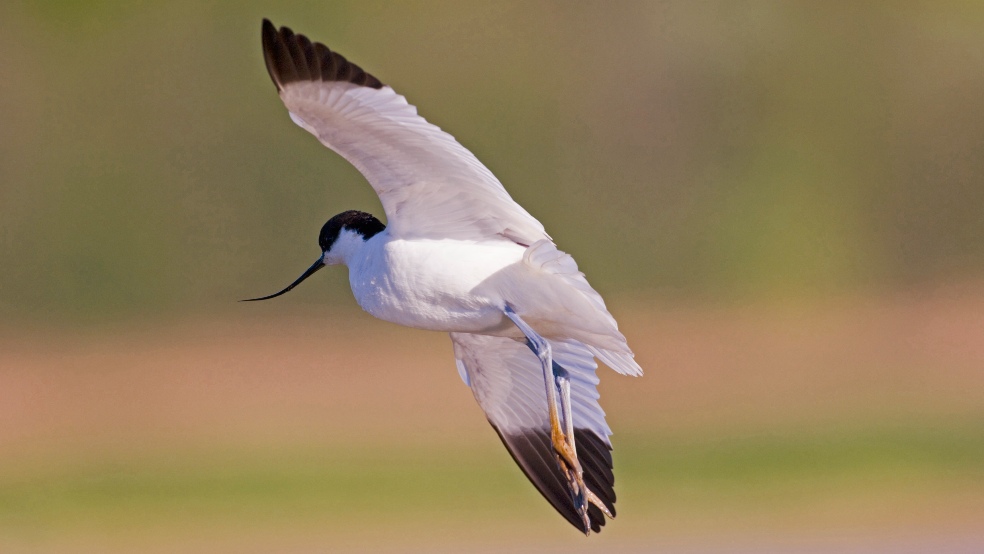 Meanwhile, 12 miles down the coast, other avocets had chosen to settle on Havergate Island, an area which had also reflooded because of wartime activity. The pair of nesting sites were successful, with Geoffrey Dent, chairman of the RSPB Watchers’ Committee, one of the few people who knew both existed.

The RSPB were quick to take action and leased the site from the landowners almost immediately, in April 1947, 75 years ago. It was then bought by the charity two years later.

*Rumour has it that those in the know used the codename “zebra” for the avocet, so much was the fear for their safety. Quite what locals thought when they overheard conversations of zebras with blue legs and bendy beaks returning to Suffolk, we don’t know.

Transformed by a visionary

In 1959, a former post office worker, Bert Axell, became the reserves full time warden and so began a conservation revolution. This was a big man with a big plan, realising that if Minsmere was to remain a wildlife haven it needed to be managed. 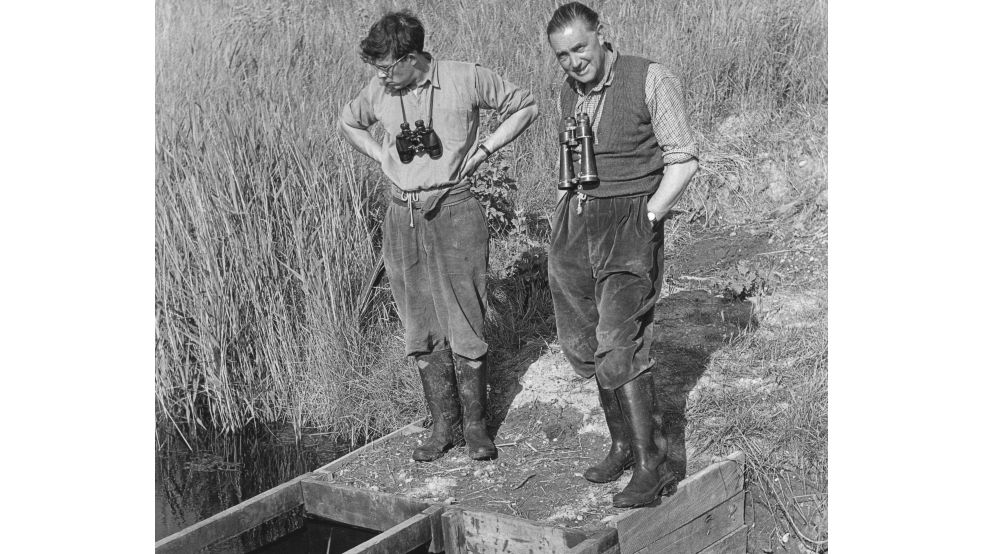 Take reedbeds – he saw that if they are left unchecked, they soon take over open water. Likewise the patches of bare earth, which so many birds and insects like, soon become grassland or scrub if vegetation is not cut back.

Crucially at Minsmere, he saw that the water levels and salinity of the water needed to be managed to create the perfect conditions for wading birds, terns and gulls to thrive. This led to one of Minsmere’s defining features, The Scrape, an area of shallow water, islands and bare mud which these birds love.

But Bert also realised that to really make an impact, nature reserves need people to come, to explore, to see and to fall in love. Bert saw Minsmere as the ideal place to put this theory into practice, creating what he called the “Wembley stadium of birdwatching.” The Scrape was the “pitch” with hides then placed at perfect positions around it to watch the action. People could also walk around it easily because of a new circular path. At first visitor numbers were strictly limited, but the idea stuck and has been expanded on over the decades as Minsmere became more and more accessible. This approach to conserving and preserving nature is at the heart of the RSPB’s vision today, with Bert’s foresight and innovation going on to change conservation around the world. 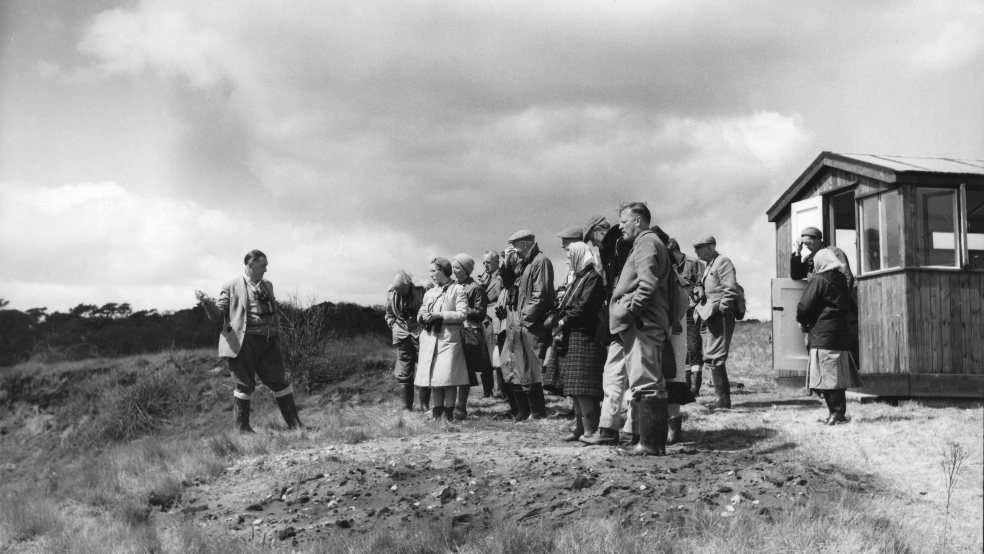 Minsmere has been and still is a place of refuge and hope for some of our rarest birds. The return of avocets here in 1947 saw the start of their recolonisation of England. They have now bred successfully at the reserve every year since 1963. Because of the way they are managed, more than half of all avocets in the UK nest on RSPB reserves, with many of those at Minsmere. In 2021 there were 89 pairs of avocet, with 23 fluffy chicks fledging. 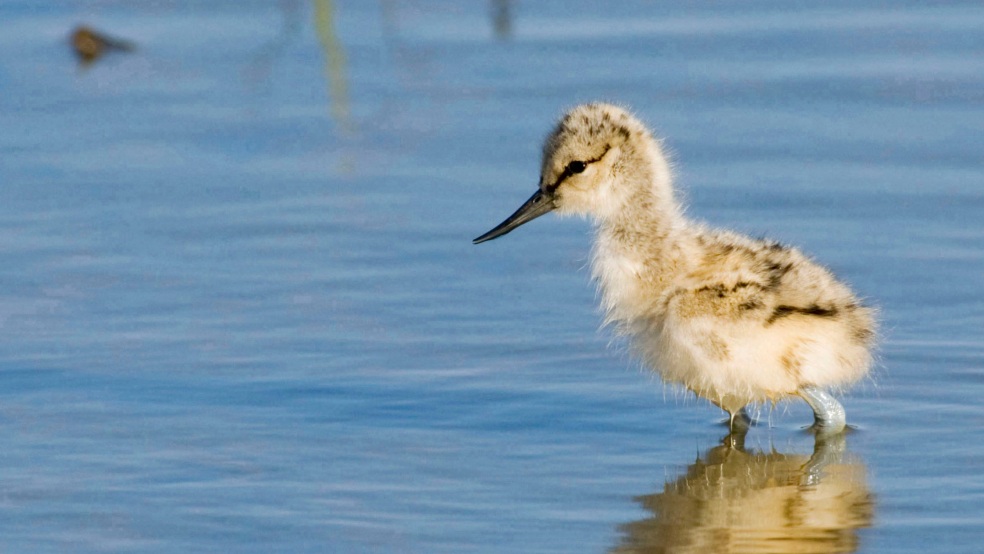 But it isn't just avocets. In 1971, the last remaining pair of marsh harriers in the whole of the UK nested at Minsmere.

They had been at the reserve since the 1940s, but habitat loss, persecution and the impact of the now banned pesticide DDT had seen them decline dramatically, with this solitary nest their last stand.
Since then, better protection and a huge amount of hard work to create ideal habitat, including at Minsmere, has seen their numbers increase. Last year saw nine nests at the reserve, with 16 young fledging. Watching the adults glide effortlessly over the reeds in search of prey is now an iconic moment for many who visit the reserve.

Minsmere has also played a vital role in another success story – that of the bittern. The bird with the boom was extinct as a breeding bird in the UK in the late 19th Century, and although they returned, by 1997 there were only 11 booming males in the UK. 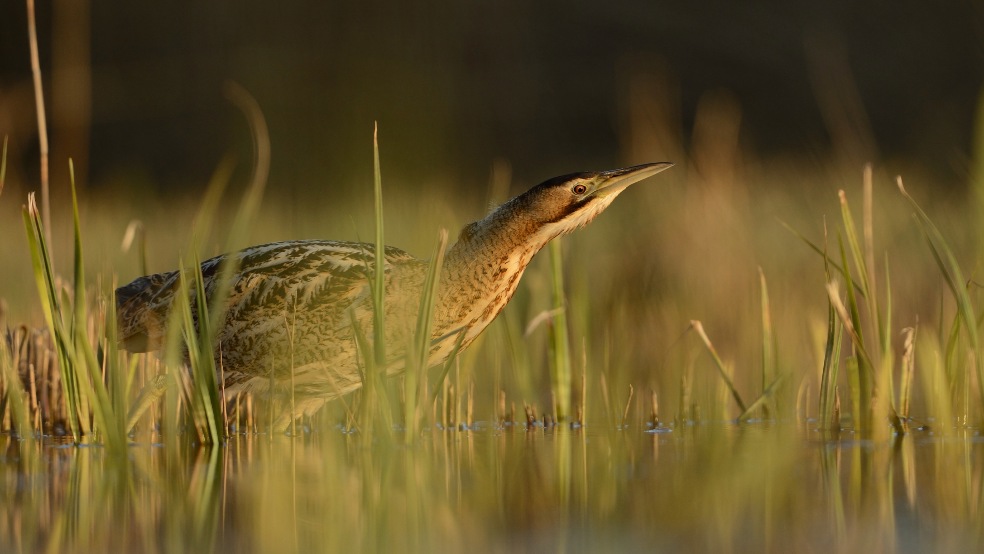 Alarmed by the decline, the RSPB studied the needs of the secretive stocky birds and began to put in place plans to increase the type of habitat they prefer. Minsmere was central to the necessary research and by 2004 there were nine booming males on the reserve, compared to two in 1997. The numbers have remained around those levels, with eight booming males on the reserve in 2021.

One of Europe’s wildlife hot spots

We know we have said it already, but it needs repeating – more than 6,000 different types of animal, bird and minibeast have been recorded at Minsmere, making it one of Europe’s most diverse spots for wildlife. To break it down a little, more than 340 types of bird have been seen here, with 100 breeding. Otters, badgers, water voles and a 300 strong herd of red deer are some of the mammals, while adders, natterjack toads and 13 types of fish have also been seen. Rare butterflies and moths, such as the silver studded blue, flutter, while glow worms glow and antlions hunt. 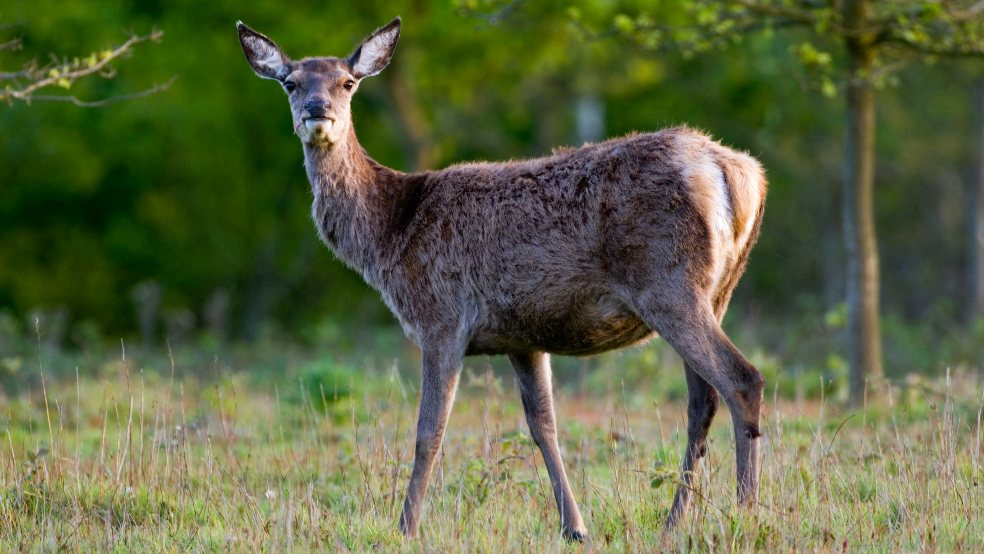 The huge variety is down to the rich and varied landscapes within the reserve. Visitors can head out on an adventure around breezy reedbeds, squelchy wet grasslands, pebbly shorelines and heather scented heath.

With its looks, charisma and host of budding stars, Minsmere is pretty used to film crews and presenters coming to visit. The BBC’s Springwatch, Autumnwatch and Winterwatch have all featured the reserve as well as numerous other nature documentaries over the years.
This has only increased its popularity with visitors, with 80,000 coming to walk, talk, look, listen and learn. For many, the reserve sparks a love which never leaves, with people returning time and time again to experience its magic. 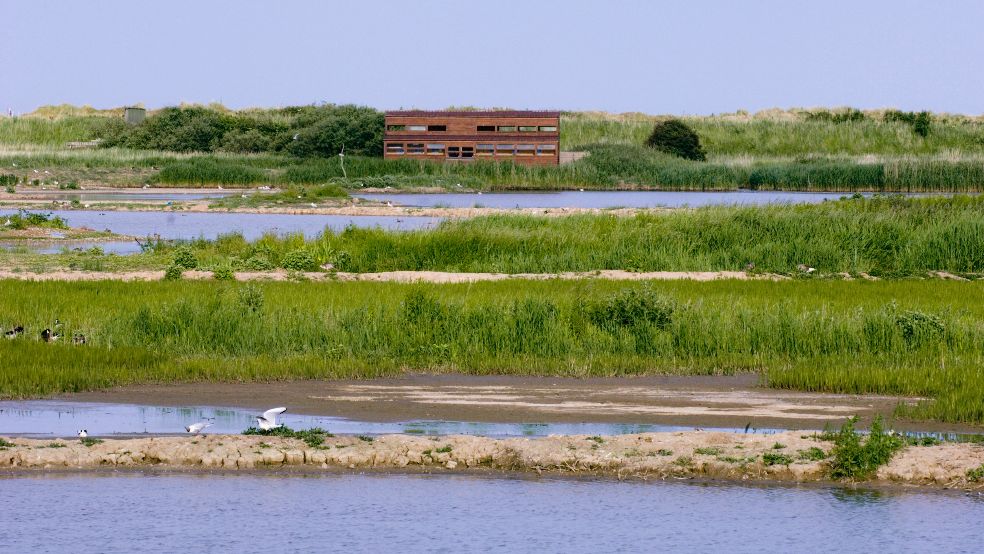 The power of our volunteers

Minsmere would not be the amazing place it is without the army of volunteers. Currently, a team of 105 give up their spare time to help this magnificent site thrive. From habitat management to monitoring bird populations, leading guided walks to welcoming visitors at reception, creating displays to informing our visitors. Their passion, enthusiasm and skills are a vital part of making this site what it is – a home for wildlife and a place where people can connect with nature and take a moment out of their busy lives to find serenity. 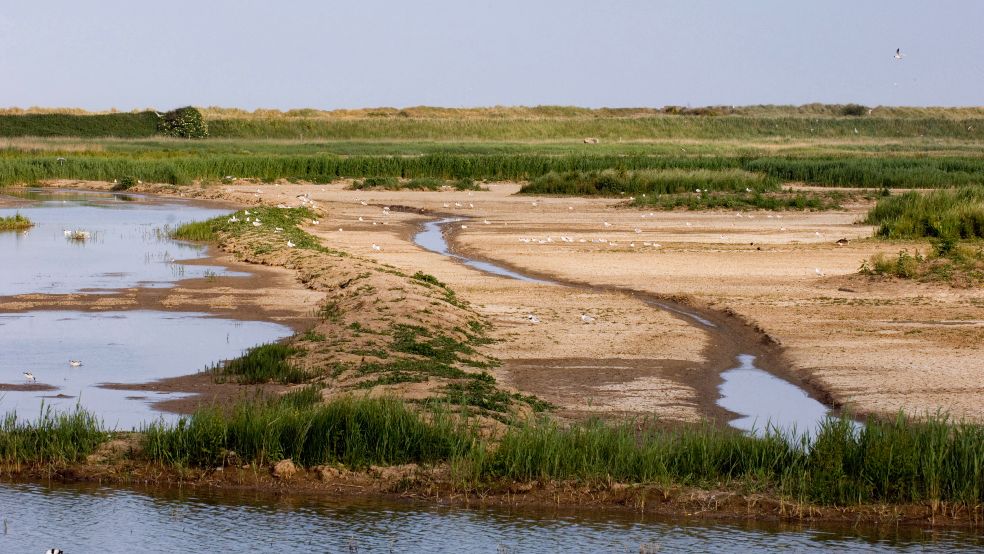 A year to remember!

It’s time to celebrate and we want to celebrate with you. Fancy a reedbed ramble? How about a 4X4 safari adventure? Or maybe pond dipping, a family wildlife walk, a heathland wildlife wander or even a star spangled celebrity book signing? Just like our wildlife, our celebratory events programme is rich, varied and sumptuous – head here to have a look.

We have also created some pretty special commemorative merchandise to mark the occasion, including a new illustrated 75th birthday wildlife booklet to help you spot 75 different wildlife species on your visit. Available to buy for £3.50 at RSPB Minsmere reception, the booklet includes spectacular photographs of wildlife taken by RSPB volunteers and staff. 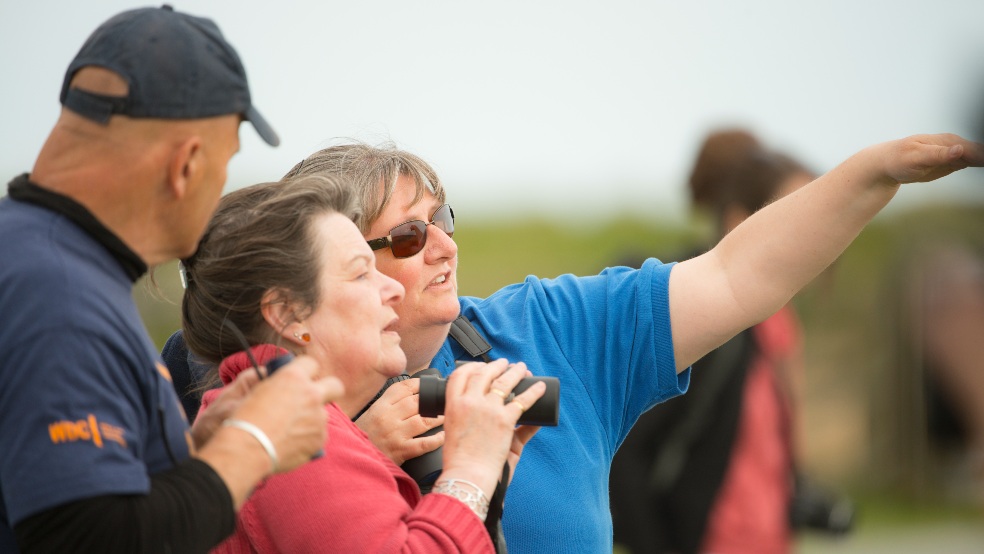 Our campaign to make sure Minsmere stays magical

We want to keep Minsmere special. This has never been more in our minds than now, as EDF look to build a new nuclear power station on the southern boundary of the reserve. This could be catastrophic for the wildlife which lives here.
In 2019 we launched the #LoveMinsmere campaign which saw 20,419 people take action and write to EDF, about why the reserve must be protected. This was followed by more than 1,000 people coming together for the #LoveMinsmere Festival. The crowd created a giant heart on Whin Hill, sending a visual message to EDF.

In 2020, more than 100,000 people signed our e-action – clearly showing the Planners the high levels of support for the campaign to protect this incredible place.

To find out more about the latest developments, head to our Love Minsmere page.

Fancy a reedbed ramble? How about a 4X4 safari adventure? Or maybe pond dipping, a family wildlife walk, a heathland wildlife wander or even a star spangled celebrity book signing?

Fancy a reedbed ramble? How about a 4X4 safari adventure? Or maybe pond dipping, a family wildlife walk, a heathland wildlife wander or even a star spangled celebrity book signing?