Puffins get typecast as clowns of the sea. But it’s time to set the record straight. It’s difficult to put your finger on why puffins have captured the British imagination so. People will happily sweat their way up to a cliff top or huddle against bitter winds for hours for a chance glimpse of a puffin. Perhaps it’s the combination of jaunty amber beak, adorable waddle and expressive dark eyes. They are so winsome we pinch ourselves to think puffins are among “our” wildlife. You think you love puffins now. Wait ‘til we tell you about their unexpected tough side.

It’s a pirate’s life for me

'Sea parrot' is maybe a more appropriate nickname for puffins. People are often surprised by how small these seabirds are up close: they weigh about the same as a can of Irn-Bru. But, as Northumberland Coast Site Manager Paul Morrison said “they are tough little critters”. Puffins dive as deep as 60 metres under water and reach 55mph in flight by flapping their wings 400 times a minute. Not bad for a “clown of the sea”. They spend eight months of year wandering the oceans and winter out over a vast area. Some have swashbuckling adventures far as away as the western Atlantic off Greenland. 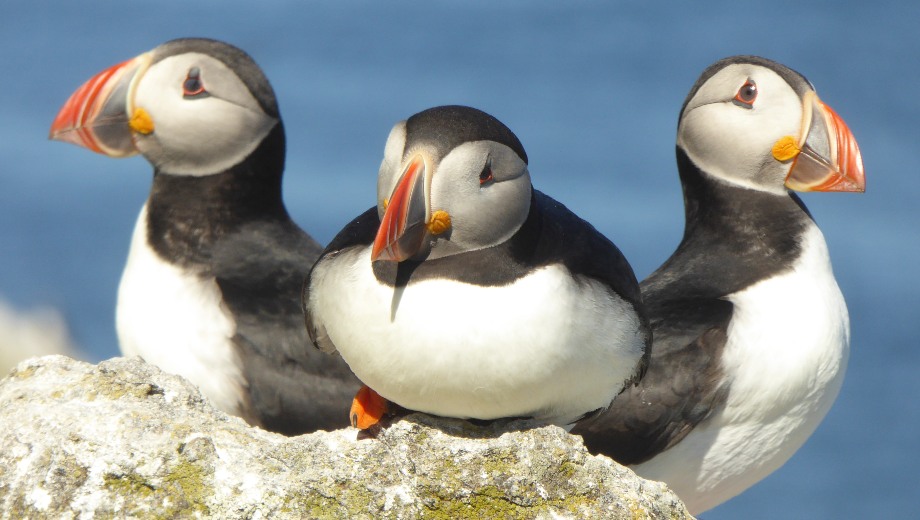 Puffins make hardy parents, when they make land ahoy in March, excavating their own underground nesting chambers with their feet and bill, turfing excess sand or soil behind their little forms as they go. Once complete, they make a soft nest in their burrow out of feathers and grass. They also make up to 100 journeys a day to feed their puffling. These small, round birds are known for being territorial. Scrapping puffins can sometimes get so into their tussle that they roll down the steep slope of the colony and tumble towards the cliff edge...but the argument always resolves itself before any accidents happen.

Young puffins don’t ease themselves gradually into life on the high seas. They fledge alone late in the evening, to avoid being hunted by gulls, making a dash for the waters to make their maiden voyage. Bempton Cliffs Site Manager Dave O’Hara said: “It is always a thrill to see young puffins peeking out of their nest crevices in late July.” And it’s atop the waves where they remain until they are two or three years old. The puffins then usually return to nest in the colony where they hatched.

They are long-lived seabirds, and normally live to 30-35 years old. In March this year a 38-year-old puffin was found on the Isle of May, Scotland.

Puffins are back, baby

Spring is here which means crocuses and blossom and, if you’re lucky enough to live near a colony, puffins. 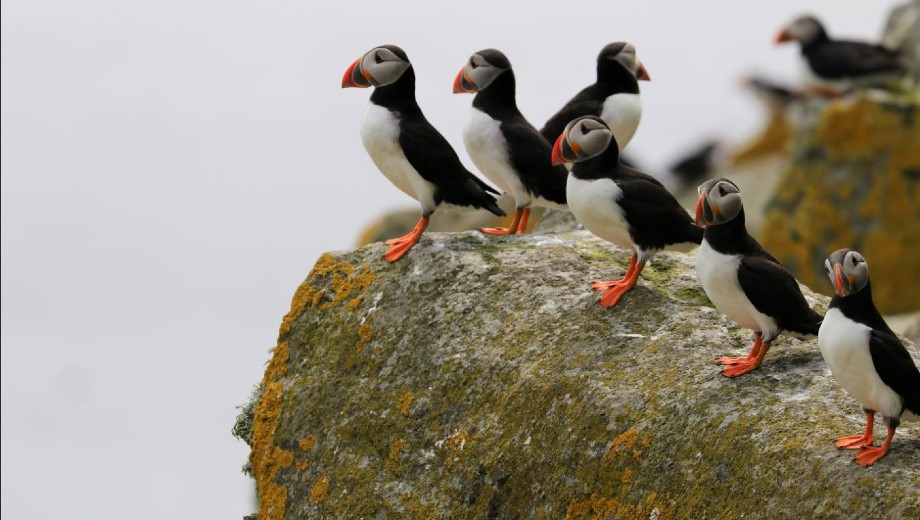 After two seasons battling everything the sea can throw at them, you’d think puffins would make a break for dry land. But puffins returning from their winter feeding grounds tend to gather offshore and hang around for a while first. A chance to get together with old friends and partners after a solitary eight months at sea; a puffin party if you will. It’s also known as a “puffin wheel”.

If someone asked you to describe a puffin, most people would start with their very fetching orange and yellow bill. However they're not like this the whole year round. In winter, puffins actually shed their outer bills, leaving smaller, duller ones behind. Their bright orange feet fade noticeably too.

They've been gone since the end of July last year, out alone in the North Sea and Atlantic for eight months, searching for fish to ensure they’re fit for the next breeding season. As the hours of daylight lengthen, their bodies respond and transform, putting on the smart, dapper outfit for which they’re so well-known. 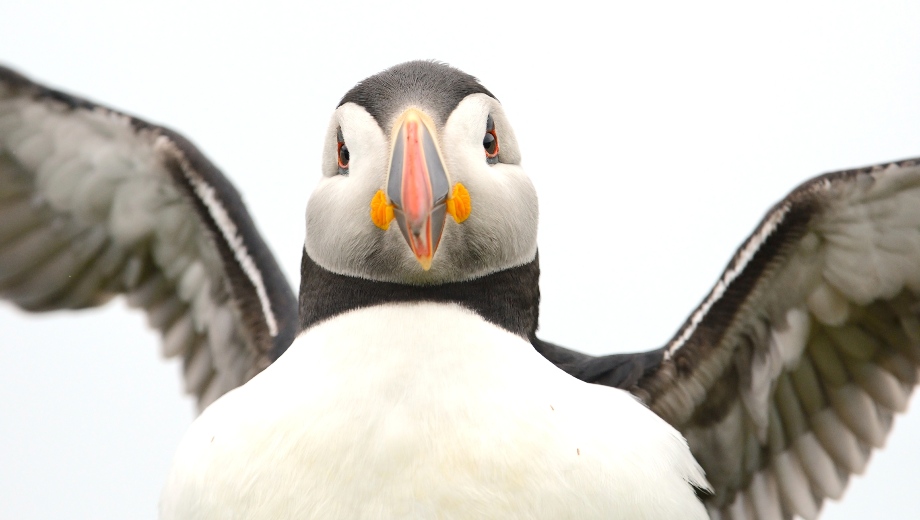 Northumberland Coast Site Manager Paul Morrison said it’s in puffins’ nature to explore. So on Coquet Island, RSPB wildlife sanctuary, the site staff give them lots of things to investigate. Paul said that within ten minutes of setting up a mirror they were queuing up to look at themselves. The puffins will already have been on Coquet for their brief exploratory en-masse visit which started last week. 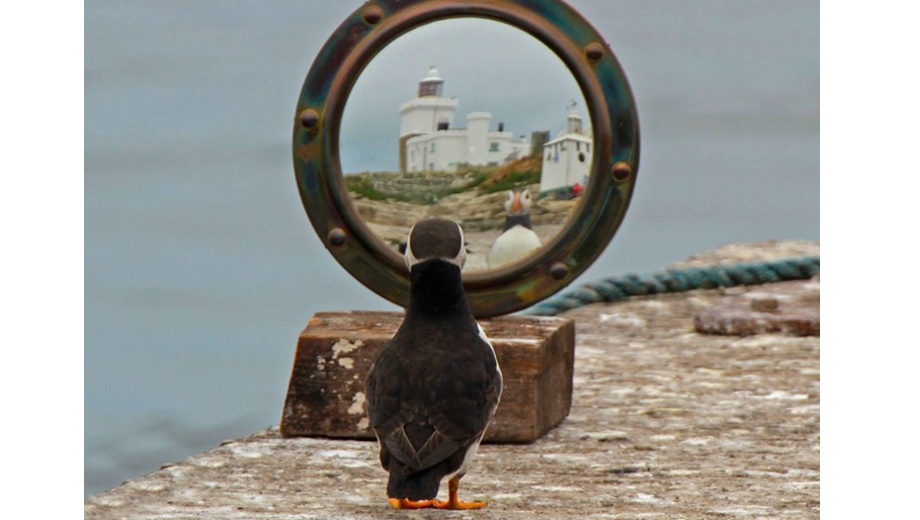 “The puffins’ behaviour commences on Coquet with a mass arrival of thousands of puffins in rafts that surround the island before they embark on an aerial fly-over to make sure all is safe. This can take an hour as they circle round and round the island in an “aerial wheeling” display before landing and spread over the entire island. At this time they reinforce their pair-bonding, carry out a lot of wing stretches and prepare their burrows. “Once content with their labours they leave the island and head out to sea to feast on sandeels and get into perfect condition, ready for their return to the island two weeks later. We have already noted that the day they return the first (individual) eggs are laid. Well organised birds are puffins!

“We love puffins! Their behaviour and curiosity are so comical to watch. At times we think we are the subject of their studies rather than the other way round, as they keep a close eye on us as we work on the reserve. Working with them is a delight – when monitoring from the reserve boat on a still evening it isn’t long before we are surrounded by puffins seemingly wondering what we are up to. One sudden move and they flee across the water only to return once more, unable to quell their curiosity.” 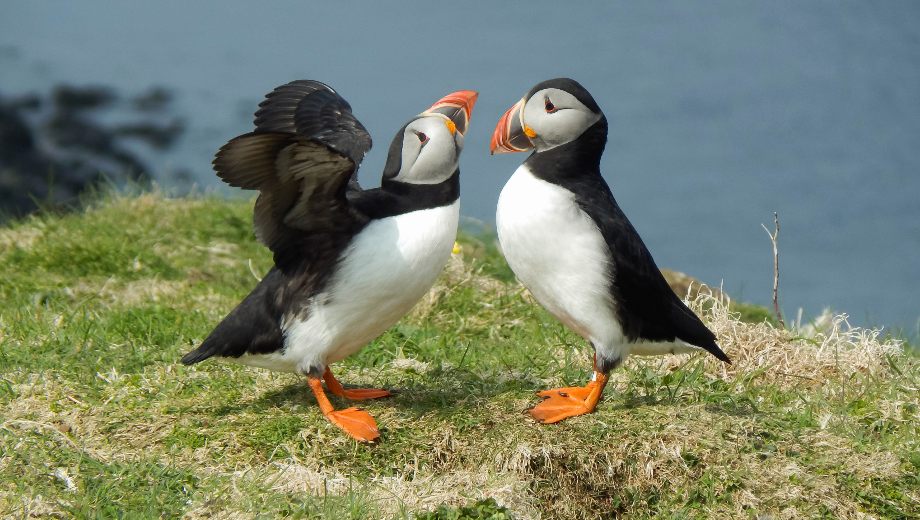 Coquet Island is perfect for puffins because the sandy soil is easy to excavate and the sanctuary status of the island means it is closed to the public and landing is not allowed. Puffin numbers on Coquet Island have increased steadily in recent years to an estimated population of 30,000 pairs. Paul is creating an artificial puffin burrow, which will be equipped with a micro cam so the RSPB can study the behaviour of puffins underground and to help us provide the best habitat possible. This cam will be added to the suite of three Coquet live cams we use to share footage of roseate terns on their own nesting terrace, a roseate tern pair inside a nest box and puffins coming and going from the roof of our observation hide. The fourth cam will allow wildlife enthusiasts to see the private life of a pair of puffins and watch a puffling as it develops. These cams will all be added to the RSPB website for Coquet by mid-April, timed for the arrival of roseate terns.

Paul said: “I can’t wait to see the puffin footprints going into our puffin cam burrow so the secret life of a puffin can begin to be revealed to us (and the rest of the world).”

Our puffins are precious

If we take our puffins for granted, they will disappear.

Puffins are red-listed and the British Trust for Ornithology released a report last year warning they could disappear from our coastlines if more is not done to tackle climate change. They are among the species most vulnerable to climate change as numbers of the fish they feed their chicks – sandeels – are plummeting due to rising sea temperatures. Overfishing is making the problem worse. Paul said: “It is hard to take in that puffins are under threat with numbers falling around the UK. Northumberland is still a stronghold for them, thanks to a combination of factors – ideal nesting habitat, minimal disturbance and plentiful food (the North Sea is still cold enough for sandeels to thrive).” 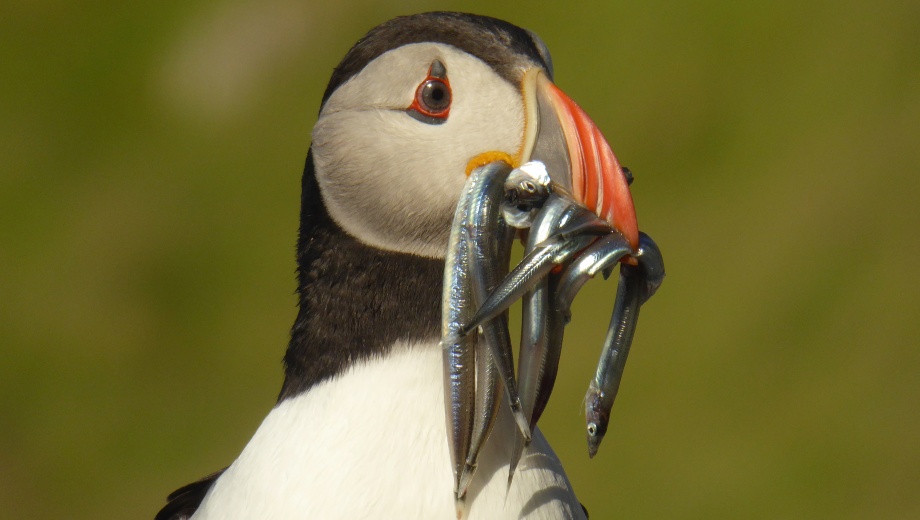 Puffins are resilient birds and their numbers can recover if we give them a chance. In 2019 a study led by the RSPB showed a partnership project to eradicate rats from Lundy Island in the Bristol Channel successfully boosted puffin numbers. A similar project was carried out in the Scottish Shiant Isles. And the puffarazzi citizen science project is helping our scientists learn how their diet is changing.

Visitors from all around the world take the ferry to see the puffins at RSPB reserve Rathlin Island in Northern Ireland, where puffins returned this week. A five-year £4.5 million partnership project to help restore seabirds at Rathlin Island started in 2021. In Wales, puffins breed on the dramatic sea cliffs at RSPB South Stack in Holy Island, Anglesey. Many people get their very first glimpse of a puffin at RSPB Bempton Cliffs reserve in Yorkshire. Site staff at Bempton cliffs said there is good news as numbers appear to be holding up as the first puffins arrived back at the reserve in March. The count was earlier by more than a week than the 2017 count, which might indicate that the puffins are in good health and well-fed, as there is evidence that when seabirds are in poorer condition, they come back to their colony later. 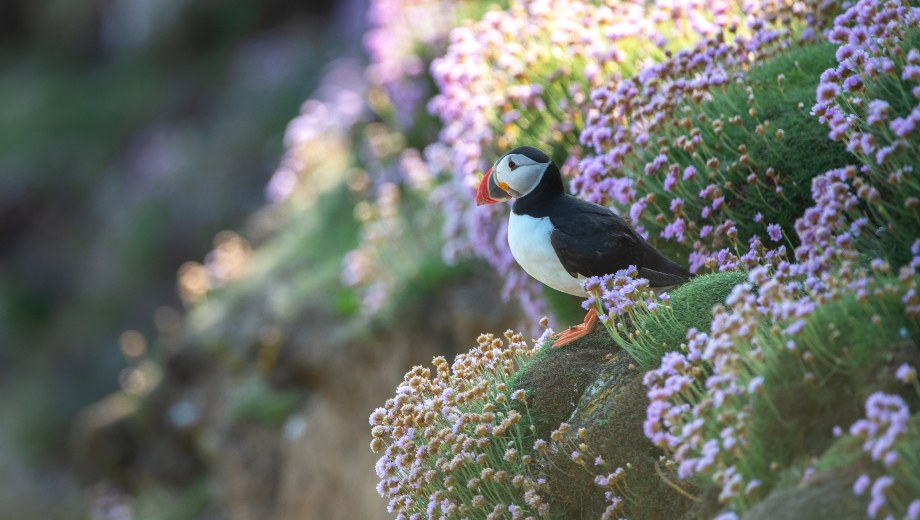 Dave said: “A part of the vulnerability of puffins is that they breed at relatively few number of colonies – so for England there are just three large colonies – our Coquet Island RSPB reserve and National Trust Farne Islands and us". “This leads onto another important development for puffins and all our seabirds, not to mention wider marine life: restriction of North Sea sandeel fishery this year.” Last year the RSPB campaigned for tougher controls on fishing for sandeels and released a report on the risks of overfishing on our seabirds. He added: “While climate change is the big issue to tackle, doing what we can to better manage our existing use of the sea around us is vital. The RSPB policy team work tirelessly to ensure nature taken more account of – this is an important step forward, but better Marine Protected Areas are the big missing piece of the jigsaw – we have largely protected the breeding cliffs here, but much more can be done to protect the feeding grounds out at sea.”

Almost everyone can recognise a puffin stood proudly on a cliff, with its chest puffed out and a beak-full of sandeels. However, there is a lot more to our seabird selection than these comical auks - and the 'seagulls' familiar to any visitor to seaside towns.

Almost everyone can recognise a puffin stood proudly on a cliff, with its chest puffed out and a beak-full of sandeels. However, there is a lot more to our seabird selection than these comical auks - and the 'seagulls' familiar to any visitor to seaside towns.