Not every animal has a taste for plants.

Many get their food by eating other animals. These animals are called secondary consumers, because they are the second consumer step in the food chain.

Animals that eat secondary consumers are called tertiary (third) consumers, because they are the third consumer step in the food chain.

This woodland food chain shows how the different consumers are linked. 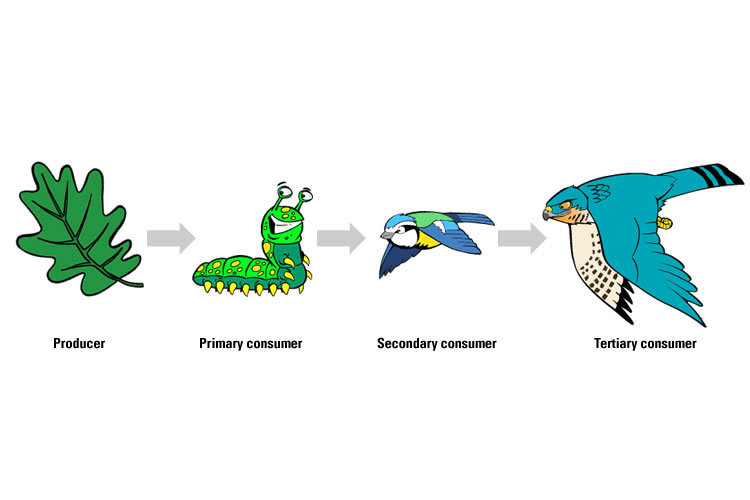 Animals are eating each other everywhere. It’s probably happening right now not far from you: perhaps a spider munching a fly on your ceiling, or a mole chewing a worm under your lawn. But don’t forget, although these animals may never nibble a nut or lunch on a leaf, they still owe their food to plants, which made it in the first place.

Nearly every kind of animal makes a meal for some kind of bird. Flycatchers snap up flies, kingfishers spear fish and kestrels swoop on mice. Of course birds are animals too, so many of them may also end up as someone else’s dinner. Weasels, snakes and foxes all eat birds – and so do other birds, including hawks, owls and gulls.

A bird’s position in the food chain may vary according to what it eats. For instance, when a blue tit eats seeds it is a primary consumer. But when it eats a caterpillar, it is a secondary consumer because the caterpillar has already eaten a plant.