It’s one of the UK’s longest running citizen science projects. Hundreds of stoic volunteers walk up to 2,000 km of the UK’s beaches in the last weekend of February each year for the Beached Bird Survey to comb our coastlines and count dead or sick seabirds.

A labour of love

Hundreds of stoic volunteers walk up to 2,000 km of the UK’s beaches in the last weekend of February each year for the Beached Bird Survey to comb our coastlines and count dead or sick seabirds.

It’s been 50 years since the February Beached Bird Survey launched to monitor chronic oil pollution and give scientists an insight into what’s driving seabird deaths. Dead birds covered in oil had washed up on British beaches since the 1840s. But the first surveys to monitor what was happening didn’t get underway until after World War II when the RSPB organised the first survey of their kind. Together with the Seabird Group, the RSPB encouraged more volunteers to walk stretches of UK beaches and record oiling on birds’ feathers. In 1972, the February Beached Bird Survey fully fledged. 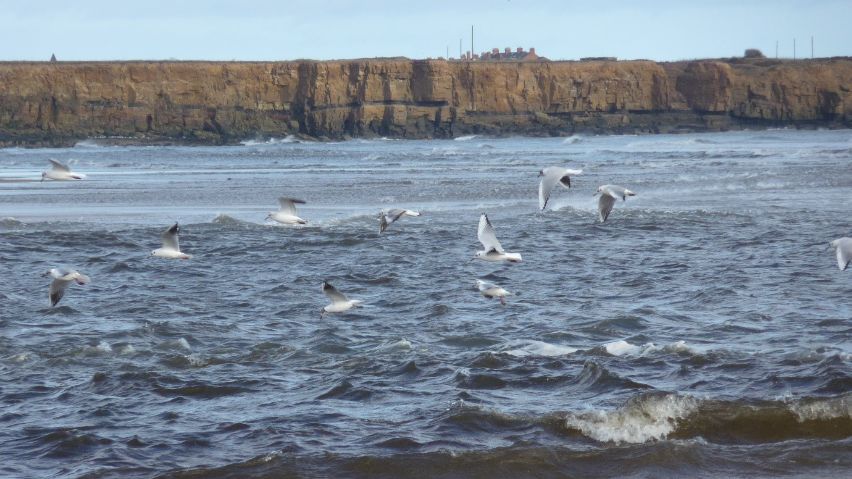 Alan Wilkie reflects on his experiences after almost 50 years carrying out the survey as a volunteer at Cambois beach and how his eyes were opened to the beauty of a beach he hadn’t known existed:

"In the 1970s the RSPB had superb film nights at the Curtis Auditorium in Newcastle. There were beautiful pictures of birds in flight, bird behaviour and peoples’ relationships with birds. These film shows were always popular and tickets were at a premium.

Attending these film shows allowed me to become involved in the local Newcastle RSPB Group and I served at the RSPB stall at county shows. I was invited or volunteered to be part of the Beached Bird Survey. I was allocated Cambois beach (pron.kæməs) tucked between the mouth of the River Wansbeck at the north and the River Blyth at the south. The beaches on the Northumberland coast are stunning and Cambois is no different. At the time I did not know where it was and I had never been there.

I have been carrying out the Beached Bird Survey at Cambois every year for almost 50 years, if not quite that number. Initially the surveys were carried out five times a year due to the amount of oil spilled from ships at that time, but when the oil on the beach reduced the number was reduced to one per year in February.

Oiled beaches were common in the early days. Our task was to count the dead birds and the sick birds and report on the state of the beach. The dead birds were mainly guillemots and gulls. I had never seen a guillemot before and I used to carry out the survey with a bird recognition book in my pocket in case I found something that I did not recognise.

If I saw sick oiled birds I was given an address in nearby Cramlington to take them for cleaning. This didn’t happen much, partly because most birds on the survey were already dead and partly because, if a bird can still run, it is difficult if not impossible to catch, even if it can’t fly! However on one occasion there were a number of oiled birds that were fairly immobile and were catchable. My wife was with me and we were able to catch several of them, gulls from memory. However our only method of carrying them was in large plastic carrier bags which we had brought for that purpose. The birds were initially quite calm but as we drove them to the RSPCA they became increasingly active, pecking through the bags until the plastic was in shreds. We made it and the bird-washer calmly took them from us and thanked us for bringing them.

I saw a dead seal once with a long straight slip down it side exposing its entrails which was distressing although it attracted a significant amount of attention.

I have not seen oil on the beach or oiled birds for several years now which is so good. I can now look out to sea and see cormorants lined up on the rocks, and on the banks below the dunes there are holes where the sand martins nest each year. There are sanderlings scurrying along the shore, lapwings and other waders together with the usual variety of gulls. On occasion I have seen dolphins following in the wake of a fishing boat.

The beach itself has changed over the years. The waves redesign the rocks and the sand regularly, and the stones which were in situ one week may not be there the next. In the early days of the survey the beach was often covered in coal washed up by the waves maybe from seams under the sea. People with horses and carts and even trucks, and others with just a sack and a shovel used to collect the coal either for their own use or to sell on. Sea coal still appears on Cambois beach but it is fine and powdery and not worth collecting.

The horizon has also changed with wind turbines generating power for our homes. 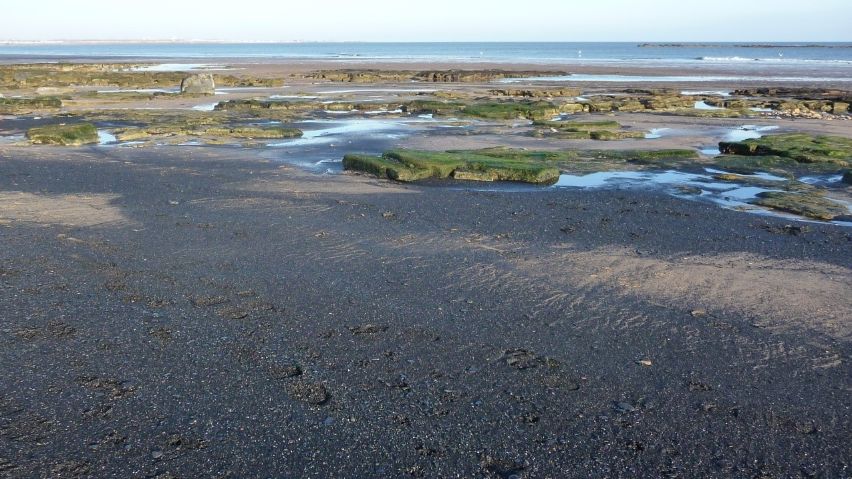 Even the approach to Cambois has changed over the years. The road to Cambois used to pass the massive Blyth Power Station, but this was demolished in 2003 and the site lay derelict for many years. Now on this road there is the site of the proposed massive Britishvolt factory which will produce batteries for electric cars.

What a change! From oiled beaches and dead birds to clean beaches, and from coal fired power stations to wind turbines and batteries for electric cars. How we have progressed.

I will always be grateful to whoever in the RSPB allocated me Cambois beach. Over the years I have walked the beach alone, with my wife, with my children as they grew up, and even with groups of friends making an occasion of the survey, plus the usually ever-present dog. I have explored the area away from the beach, the Wansbeck estuary which has thriving bird life, and the docks at North Blyth fascinatedly called Battleship Wharf. It is never crowded because, like me in the 1970s, nobody knows it’s there!"

She stepped up her volunteering in the early 1990s after being made redundant from the Civil Service, which gave her the freedom to enjoy her many passions including travel, gardening and, of course, birds.

Lynn was diagnosed with cancer in 2016 but took part in the Beached Bird Surveys for another two years. On February 9, 2019 she passed away. Lynn would have walked her stretch of coast for the 39th year running, one of only a handful of volunteers who have been stalwarts of the survey for such a long time. A tribute to her published in the results of the 2019 Beached Bird Survey said she will be missed by the many she touched with her warm heart and great sense of humour. 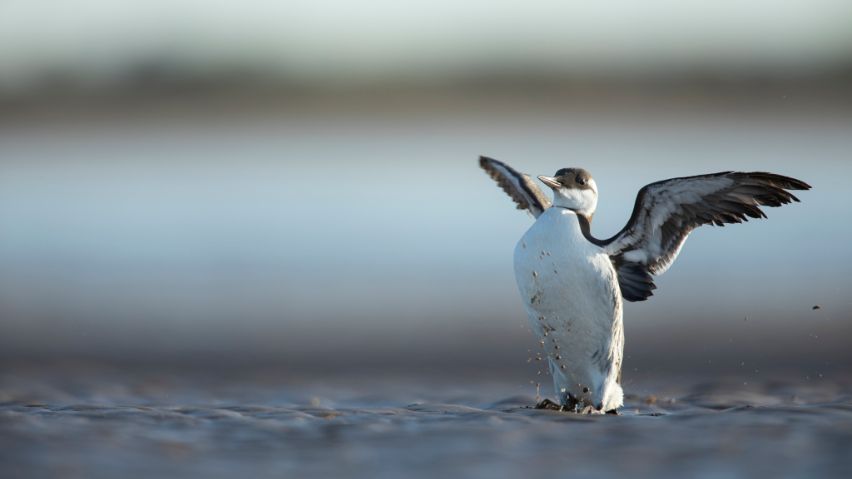 They found 240 dead seabirds – the second lowest number since 1991. Slight oiling was only noted at one beach in Cumbria and no beaches were heavily oiled. In many areas, particularly in the South and South East, beaches are being cleaned, but equally many beaches were found littered with plastics and debris from the fishing industry.

Over a third (37.5%) of all dead seabirds found were auks; as in almost all years this was the most numerous of all seabird groups recorded. This was followed by gulls (35.0%) and cormorants/shags (12.1%). All species groups were found at a well below average densities. Oiling rates have been below 5% for each of the last eleven years indicating chronic oil pollution in the North Sea is declining. In 2019 other bird species, from barn owl to woodcock were found dead or injured on beaches. Seventeen dead seals were also recorded, eight of them along the Norfolk coast.

The survey was relaunched in its current form, an annual February survey, in 1991

Why does this matter?

Although oil now poses less of a threat to seabirds, bycatch is another threat putting the future of many species at risk. If you’ve heard of bycatch, you may think of it as something that is happening in faraway oceans. But thousands of seabirds are dying in UK waters every year trapped in fishing gear. Read why bycatch is a conservation success story waiting to happen.

We aren’t looking for surveyors for the Beached Bird Survey at the moment, but if Alan and Lynn’s stories left you feeling inspired, visit our surveys page to find a citizen science project to suit you.

If members of the public find live sea birds that can be rescued it is recommended they contact the RSPCA on 0300 1234 999.

If you find a dead seabird please do not handle it. If you want to help, you can contact the UK Centre for Ecology & Hydrology using Twitter by tweeting the date, place, species, and totals of the bird(s) found and tagging the Centre’s seabird account @UKCEHseabirds.

If the dead birds are ringed and you can see the details without touching them you can report this to the BTO via their website here.